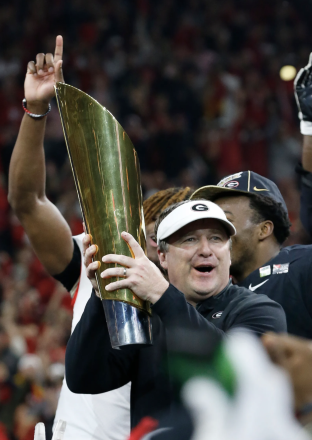 It’s the beginning of a new era, as Bainbridge native Kirby Smart has just coached the Georgia Bulldogs to their first National Championship since 1980.

Smart grew up in Bainbridge, attending Bainbridge High School, where he was known for his athletic ability on and off the field.

Upon graduating, Smart went on to play football at University of Georgia as a defensive back. He finished his career at UGA with 13 interceptions and as a first-team ALL-SEC Senior.

Smart’s love for the game didn’t end when he stopped playing. He then began his coaching career at UGA in 1999 as an administrative assistant, before moving on to Valdosta State, where he spent one season as a defensive backs coach. He was then promoted to defensive coordinator in 2001.

From 2002-2003, Smart worked as a graduate assistant under Bobby Bowden at FSU, while pursuing a Master’s Degree. Upon receiving his degree, he went to join then-LSU head coach Nick Saban as a defensive backs coach.

During his years under Saban, Smart helped the Crimson Tide win two National Championships with his defensive tactics. Something he would do again in 2022; this time facing off against Saban.

Smart showed UGA early on that they had made the correct choice, leading the Georgia to their first SEC title since 2005 in 2017.

That year, Smart would face off against his mentor Saban in the National Championship, but come up just short in overtime.

However, Smart would eventually turn the tables.

In 2021, Smart coached the Bulldogs in an undefeated regular season. The team eventually came up short in the SEC Championship game, losing to the Crimson Tide 41-24.

Smart and the Bulldogs were determined they would face off against the Tide again. They went on to win the CFB Orange Bowl and guaranteed themselves a redemption story against the Tide in the National Championship.

This go ‘round the story would have a different ending.

The Georgia Bulldogs would win 33-18, and Smart’s hometown friends and family would be there to witness the berth of a championship.

Among those attending were Smart’s parent’s, Sonny and Sharon, along with his siblings, children and wife. Joey and Jessica Miller, Ericka and Nick Adams, Blake and Kim Carruthers and Brad and Natalie Moore were also in attendance.

Smart’s parents couldn’t be happier for their son.

“We’re extremely proud of him,” Sonny said. “We know all the hard work he’s put in and we’ve seen all the hours and effort he’s put forth. We are not shocked, he’s earned this win.”

Joey Miller is still reeling from the excitement. He said he and his family have been traveling to watch the Dawgs all season long, as they are members of the McGill Society, which grants them season tickets.

Before traveling to Indianapolis, the family had traveled to Miami for the Orange Bowl, where Miller said his wife started booking hotel rooms and flights for the National Championship while there.

Joey and Jessica then flew to Indianapolis with Ericka and Nick, where Joey said the atmosphere was electric.

“There were Georgia fans everywhere,” he said. “It was probably 60 percent Georgia fans, while 40 percent Alabama fans; we were hungry for this win.”

By the time the game came around, the Dawgs were barking.

Joey said the game was an emotional roller coaster for all Dawg fans. However, once Georgia’s Kelee Ringo intercepted Alabama quarterback Bryce Young’s throw and returned it for a 79-yard touchdown, Joey said the fans became confident and really believed this might be it.

For Georgia Quarterback, Stetson Bennett IV, this was the moment he knew all his hard work had paid off and that the Bulldogs were going to be the new National Champions.

Bennett was a former walk-on and throughout the season has faced doubt from multiple critics.

However, one Bainbridge fan knew he had it in him.

Blake Carruthers grew up in Moultrie and attended Colquitt County, where he played football against Smart.

“In 1992, my sophomore year, we played against Kirby during his senior year, and we lost,” Carruthers said. “Since then, I’ve watched him go through the ranks.”

Sonny reminisced on the memory and said that was typical of son Kirby.

“Kirby has always been extremely competitive,” he said. “He strived to be the best and put forth the time and effort.”

Carruthers and Smart would have very different football careers, as Carruthers would become a walk-on at Auburn, going through some similar tribulations Bennett IV faced.

“You get left out of a lot of the things at first, but after a while the guys do respect you, that’s why I always thought Bennett could do it, and because Kirby believed in him,” Carruthers said.

Thanks to Smart’s belief in Bennett and in the people surrounding him, he will now join the elite ranks of coaches, who have coached a National Championship team.

“It just makes my heart go pitter patter when I think of it,” his mom ended.