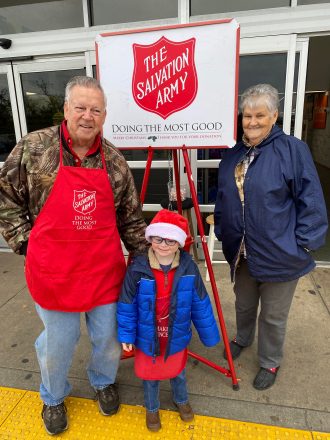 Sam Glover rings the bell with his great-grandparents, Sam and Marilyn Dunn.

This year, Salvation Army’s Red Kettlebell Campaign of Bainbridge had another banner year. This is the second year in a row the Salvation Army has done this.

The campaign takes up about 20% of the Salvation Army’s budget a year and lasts for six weeks. This is the largest fundraiser for the ministry, which is why meeting its goals are important.

Merreann Mcdonald, the director of the Salvation Army, said she is thankful for all of the volunteers and her community. Without them, she knows the campaign would not have done as well as it did.

With last year being a banner year too, Mcdonald set a goal for Salvation Army to surpass that amount by five percent. Much to her excitement, McDonald said they exceeded that this year and surpassed it by six to seven percent.

Even though there were a lot of obstacles this year, The Salvation Army still met their goals. With a shortage of workers, the holiday season, and being in the midst of a pandemic, Mcdonald said she knew this would be a lot to take on this year.

Not only was McDonald trying to keep this campaign going, but at the same time, the ministry was gathering gifts to provide to children this Christmas.

Trying to focus on one thing at a time was a lot to keep up with, but in the end McDonald said she believes it was all worth it.

McDonald said she was happy to see how generous the community was, despite everything going on.

McDonald said this is what she loves the most about her job, getting to interact with her community. She said the best thing about the kettlebell campaign is seeing the smile in the giver’s eyes whenever they donate, as she believes this shows how much they actually love and care about their community.

Not only that, but McDonald said the volunteers she has are very hardworking. Even though there was a struggle to get volunteers, she said she knows everyone still made an effort. Each bell ringer stands and rings the bell for approximately eight hours. According to McDonald, bell ringer after bell ringer would tell her how much they enjoyed seeing others in their community donate.

McDonald said she was overwhelmed with the number of donations this year. Being on vacation and coming back, she said she was excited to be back at her desk. Mcdonald said that Bainbridge has an incredible ministry here and encourages everyone to volunteer, so they too can see the magic that is in the community.