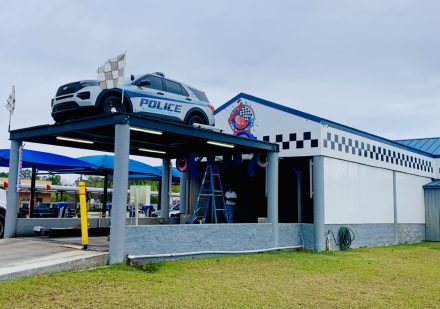 Bainbridge Public Safety’s new Interceptor SUV can be found on display at the Finish Line Car Wash. The rest are set to roll out later this month.

According to BPS Director Frank Green, sixteen new 2021 Ford Police Interceptor SUVs are expected to roll out on the streets of Bainbridge within the next two weeks. Citizens will certainly notice the all-new design featuring a silver base with striping and lettering in shades of blue.

The sixteen new Interceptor SUVs are being outfitted with patrol necessities such as light bars, sirens, computers, etc., and will replace the current inventory of 2013 Dodge Charger patrol vehicles.

Green stated, “It’s time to replace some of our patrol units due to age and mileage issues so we decided to take this opportunity to go with a brand new image…silver and blue.” He continued, “Citizens will continue to see some of our black and white SUVs as they are not due to be replaced at this time.”

The BPS Interceptor SUV will be on display until Thursday, January 13th. BPS invites the public to stop by Finish Line Car Wash at 1616 East Alice Street and check it out!