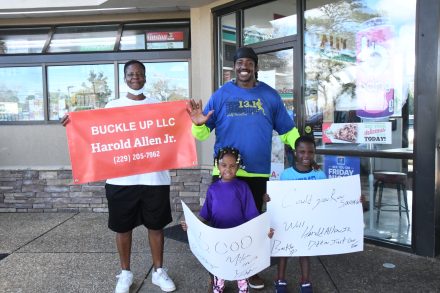 Harold Allen stands with his mother and nieces after meeting his 5,000-mile goal on Tuesday.

Local Runner Harold Allen made a personal record last week, running 5,000 miles total for this year. Allen initially crossed the 4,900-mile threshold last Sunday, having competed in the Tallahassee Ultra Distance Classic. Allen came in first in his age group, while he came in second in the race overall.

The run stretched over 50 miles, through Wakulla Springs State Park, and took Allen 7 hours and 59 minutes to complete.

“I did this race five years ago,” Allen told the Post-Searchlight. “So it was my first ultra-run… it just popped up as a training run preparing for my next 100-mile race. As I’m thinking about it, I’m like ‘Whoa, that’s five years I’ve been running.’”

Allen has certainly improved in those five years, finishing two hours faster than his previous run. “It was more meaningful to me, you know, overcoming all the adversity I had to overcome… That race right there put me at 4,900 miles for the year. I’m closing in on a big goal for the year.”
“It’s always a big accomplishment when you’re able to progress on your training.”

Upon finishing his race, Allen returned to Bainbridge to complete a personal goal he had set in January of last year: running 5,000 miles.

Allen ultimately met the goal at noon on Tuesday.

Allen said he first set the goal when he was talking with Mark Petty from the Gulf Wind Track Club last year.

“We talked about it, and I decided I wanted to try and average a half marathon or 14 miles, a day,” Allen said.

Allen said he ran the miles for himself. He said he wanted to see if he had what it took to complete this milestone achievement.

“It was all about making adjustments and sacrifices in my life,” he said. “I would run roughly 1-4 hours each day, even in the rain, cold or heat. I made no excuses for why I couldn’t run each day.”

Allen said he would try to run a different route each day, as not to get bored with the same old routine. In total, he ran 4,500 miles in Decatur County alone.

“I feel really good about what I did,” he said. “I showed people it is possible; you just have to pursue your goal relentlessly.”

Allen has no plans of stopping.

He plans to race again in February at the Iron Horse 100, located in Florahome, Florida.

There, Allen hopes to pursue a new goal of running 10,000 miles by January of next year.