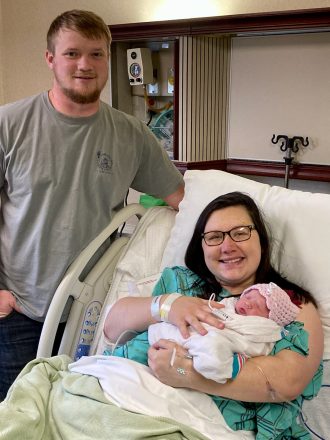 Abigail Beaty and her husband Tyler smile with their newborn after donating her birth tissue to telaGen.

MHM Labor and Delivery Nurse Judy Godwin said Beaty was eligible due to her giving birth via C-Section.

Godwin said she first heard about telaGen’s program a few months ago when she attended a conference.

“They were there and a representative spoke to us about their program,” Godwin said. “I came back and presented it to my doctors, who were on board.”

Godwin explained that a telaGen representative comes in the moment before a C-Section and explains the opportunity of birth tissue donation to parents.

TelaGen specifically wants the amniotic membrane or “amnion,” which protects the embryo during pregnancy against any injury that can lead to fetal death.

The amniotic membrane is the only tissue designed by nature specifically as a universal transplant.

It can be used to treat difficult-to-heal wounds and soft tissue injuries. It can additionally be used in the area of eye surgery as a foundation to replace the damaged eye tissue. It is also largely used in burns, leg ulcers and pressure ulcers.

Godwin sees this as the biggest benefit.

“I think it’s great that a mother could potentially save someone’s life, especially a burn victim with their birth tissue donation,” she said.

Upon hearing all of the various ways her donation could help, Beaty was on board, making her the first donor.

Since her donation, Godwin said no one has turned down telaGen, who have since completed six additional birth tissue donations.

Godwin did specify that mothers who have known diseases such as Hepatitis or HIV are not eligible to give birth tissue donations. However, mothers who give donations will have their placenta sent to the pathology lab to check for any diseases once the amnion is taken out.

Due to the success of the program at MHM, Godwin referred telaGen to Donalsonville Hospital, who now is offering birth tissue donations as well.

For more information on how to donate birth tissue, contact a provider at Magnolia Women’s center or visit telaGen’s website at www.telagenllc.com