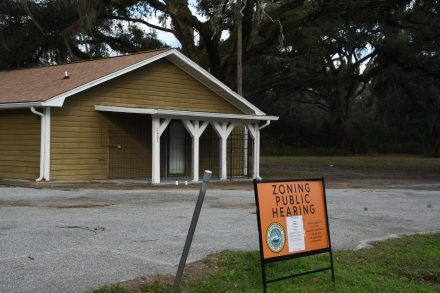 Tuesday night, the Bainbridge City Council met for their regular meeting, where a split vote on a Planning Commission recommendation forced Mayor Edward Reynolds to make the final approval.

Lisa Sapp was one of those residents.

“I’ve been in my residence since 1984 and I raised my family there, but over the years… the property, the community and the neighborhood has changed,” she said. “We have had crime and break-ins.”

Sapp said the crime and break-ins would only get worse if Tirado put in a complex.

Sapp said she believed Tirado would not make it a complex, but a boarding house.

Sapp then claimed that because no “decent person” would live there, Tirado must be planning to house migrants and immigrants.

Sapp said the neighborhood has had issues with migrant workers in the past; many of whom have broken into Williams Automotive.

“We are begging you not to do this,” she pleaded. “We are asking that it does not pass, it is for the safety and community of our family. I have had enough of people buying up property in our neighborhood and allowing anyone and everyone to move in there. We are very concerned.”

Tirado then addressed the City Council, stating when the property went up for sale, he contacted an architect and contractor asking if it would be possible to turn that property into a multifamily unit.

“When I buy a property, I do everything I can to make sure that the person who will be living there will feel safe and comfortable,” Tirado said.

Tirado went on to say he was aware that the previous owner of the property did leave a sour taste in the current residents’ mouths, but he should not have to pay for that.

Tirado understood Sapp’s concern about the tenants who would live in his complex and explained he does a very robust screening process.

“If I spend a good time on the screening process, it usually pays back because I have no issues,” he said.

Tirado provided the City Council with examples of his other properties he had renovated, showing them he intends to keep his word on renovating the current property and making it a comfortable place for families to live.

Tirado was then faced with questions from several Council members.

Reynolds asked for details on Tirado’s plans, questioning how many apartments the property would hold.

Tirado explained the complex would have seven apartments. Each unit would feature two bedrooms, a bathroom, a living room and a fully equipped kitchen, measuring approximately 850 square feet each.

Reynolds then asked if the conditional use would allow for Tirado to add more complexes later on, but it was explained he could eventually, but would have to return to the Planning Commission in order to do so.

Councilman Kregg Close said he felt for the neighborhood and what they had been through over the years.

“They feel like they’ve been slapped in the face over and over and it gives them the feeling we are allowing this in certain neighborhoods and not others,” he said. “My concern is that this is too many apartments in such a small space.”

Close suggested Tirado meet with the neighborhood and have a “Come to Jesus” meeting.

“Sometimes, if we put more into things, we get more out of it,” he said. “I feel like a meeting needs to be had with that community.”

“It’s a hodge podge building, I just feel like you should’ve started from scratch and put more into it,” Palmer said.

Tirado told them he was willing to work and make the changes necessary for the building to work for everyone.

“I am open to suggestions, I want to do the best I can for everybody,” Tirado said.

Councilman Don Whaley told his fellow Council members that he understood their concerns, but knew Tirado and knew he was a man of his word.

“I’ve known Sergio for a while now and he’s always done what he said he would do,” Whaley said. “I have no doubt that given the opportunity, it will be exactly as he said.”

Following the Council’s statements and questions, Reynolds opened back up the floor for any additional comments.

Doug Williams of Williams Automotive addressed the Council, explaining his concern that if multiple people were brought into the neighborhood, more break-ins at his shop might occur.

“I think Sergio is a nice guy, but if he starts unloading busloads of people, who break into my cars again, I want to be able to contact City Council,” Williams said.

Reynolds told Williams that Tirado had completely different plans from the last owner, and that housing for seasonal workers was still not allowed.

“That’s the reason the last people got moved off, and if it happens again, Tirado will be moved off,” Reynolds finished.

Reynolds then voted in favor of the complex, approving the decision.