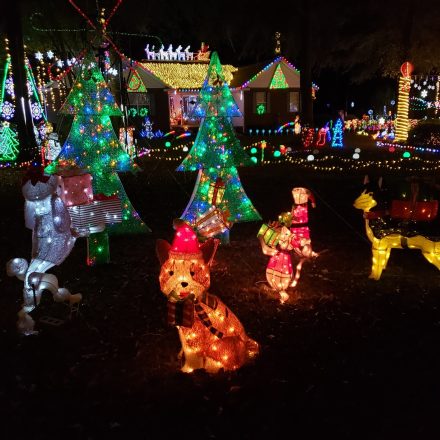 The Woodams added this animal scene, depicting a Christmas mouse, dog and rabbit bringing their gifts to the tree.

The Woodam family has long been known for their Christmas lights display in the River Oaks neighborhood. This year, they have once again outdone themselves, attracting attention from across the Southwest and even into Northwest Florida.

Gary Woodam said they first began decorating their home for the community approximately 20 years ago.

“I grew up decorating our house as a kid for Christmas, and it was something I wanted to continue for my own community,” Gary said.

Putting on something as elaborate as Gary does, though, takes a lot of work.

“We are on a certain schedule and have to strictly stick to it in order to be up the night before Thanksgiving,” Gary said.

No year is exactly the same, though.

Each year the Woodams try to add a scene to their display. However, these are no ordinary scenes. Most of them are built by Gary and can often take years.

“We have a plan for what scene we want to add next,” Gary said. “Occasionally, though we will see something and think how can we incorporate that into our setup.”

Gary said he is currently working on a scene that he hopes to have built in time for next year’s display, but it all depends on the products required.

“Some of the scenes I’ve constructed took nearly three years to build,” he said.

Although Gary puts all his energy into all of his constructed pieces, he is partial to the nativity scene he constructed years ago.

Gary admits that when he first began constructing sets for the light display at his home, he never expected it to become this big, but now he sees it as a hobby.

“We do it for the community, and it’s something we love to do,” he said. “There are people who tell us that this is what puts them in the Christmas spirit, and I enjoy that.”

Gary said the interior of the home was once filled to the brim with Christmas décor as well, but has since become a little smaller, due to the family spending most of their time on the outdoor display.

“Our time is mostly limited to the outdoors now,” he said, much to the Bainbridge community’s delight.

Woodam hopes the Christmas lights tradition will carry over to his two daughters, who he said have begun putting up some lights of their own.

Until then, Gary said his lights display will be up until January 5 at 195 River Oaks Drive, where guests can see various scenes and turn their radio on for musically-choreographed displays.