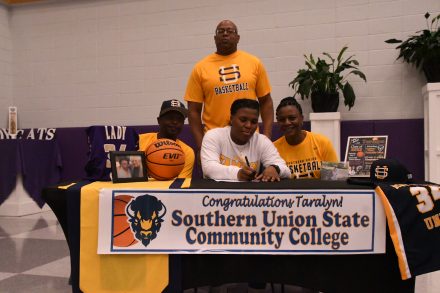 Wednesday afternoon was an exciting day for three seniors at Bainbridge High School, who signed athletic scholarships to continue their pursuits into the collegiate setting.

Athletic Director Scott Miller welcomed parents, friends and faculty to the signing, thanking them for joining the school in such an exciting time in the lives of the student athletes.

“I was just looking back, and we’ve had 36 student athletes sign scholarships in 8 different sports in the last 4 years,” he said. “It’s a credit to you as parents and family members and coaches, who helped fulfill these dreams.”

Miller then turned it over to Lady Cats Head Basketball Coach, Kelvin Cochran.

Cochran was excited to announce Taralyn Brown would be continuing her future at Southern Union State Community College.

“Congratulations to Taralyn and her family,” Cochran began. “It’s been a lifelong dream of Taralyn’s to play basketball at the next level, so we are glad she was able to achieve that at Southern Union.”

Cochran explained Brown had suffered a serious injury this past season, benching her for all of summer workouts and pre-season workouts, but she has since returned to the court, and he expects great things of her this final season.

Brown said her decision to choose Southern Union stemmed from the close camaraderie on the team.

“It was obvious they were friends on and off the court,” she said. “When I met the coach for the first time, we clicked immediately, and I knew this was where my heart was at.”

Brown will be starting as a post, but said she may be subbed around to other positions during the year.

She plans to major in Kinesiology, with hopes of eventually transferring to Albany State University to finish off her basketball career and graduate.

Cochran then passed the microphone to Lady Cats Head Softball Coach, Christopher Bryant, who shared that catcher Halle Cannon would be continuing her athletic career at College of Charleston.

“As Coach Cochran said about Taralyn, this has been a lifelong dream of Halle’s,” Bryant said. “The kid has worked since she could probably hold a ball until today. She is constantly working to better her game and the College of Charleston is getting a high character student athlete, who sets the bar high.”

Cannon said she found an easy fit at College of Charleston, because it felt like home and the coaches made her feel wanted.

Cannon said she will start as a utility player, taking her assignment in the field wherever she is told. Cannon is currently undecided in her major, but said she hopes to graduate with a good education, before settling down with a family.

“Landon is the epitome of working hard,” Conner said. “He is extremely dedicated to running both cross country and track. He has done everything required of him from changing his diet, to sleep schedule and all of the small things. He has always done anything he thought could help him, which would in turn help the team. He has a team first mentality, and we are extremely proud of him.”

When asked about his decision to further his running career at Thomas University, Watts said it was an easy choice.

“The school is close by, and they recently started their program,” he said.

The running program is only three years old, but Watts said he believes he can grow to his full potential there.

While attending Thomas University, Watts hopes to major in Marketing.

He concluded by stating what many of the athletes had on their mind Wednesday afternoon, “I’m just really ready for this opportunity.”