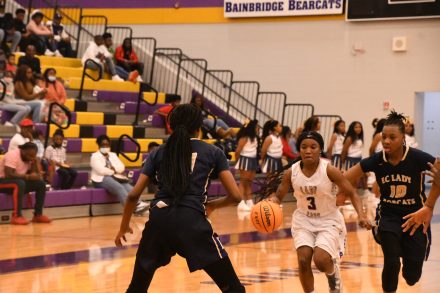 Angel Peterson dribbles down the court, while surrounded by Lady Bobcats.

The Lady Cats split games last week, coming up short in a nail biter against the Lady Packers and eventually winning to the Lady Bobcats on Senior Night.

Their Tuesday night game against the AAAAAAA Lady Packers was an incredibly close game, nearly sending the team into overtime.

The Lady Packers held the lead in the first quarter, scoring 10 points, while the Lady Cats managed to score seven points.

Courtney Sanders led with four points, while Detavia Salter made a 3-pointer.

The Lady Cats managed to go shot-for-shot in the second quarter with both teams scoring 13 points.

Salter had five points, making a combination of shots, while Kirsten Noble had four points and Taralyn Brown made a 3-pointer.

However, the Lady Cats were still being edged out by the Lady Packers, 23-20.

Coming out of halftime, the Lady Cats had their best quarter, scoring 20 points to the Lady Packers mere 8 points.

However, the Lady Packers’ defense managed to hold the Lady Cats to only 3 points in the final quarter, while they scored 15 points, giving them a 43-46 victory.

Sanders and Salter were the only two who were able to get on the scoreboard in the final quarter.

Sanders hit a 2-point shot, while Salter made the free throw.

Head Coach Kelvin Cochran was understandably disappointed in the ending.

“We have to do a better job of finishing out games,” he said. “We were up 9 points going into the fourth quarter, there’s no excuse for what we did.”

While Cochran was disappointed, his hope was that the girls would learn from this game and see why he preaches mental toughness so much.

Much to Cochran’s delight, the Lady Cats improved their game for senior night, winning 42-24 to Early County.

Salter hit double figures with 15 points, along with Angel Peterson, who had 11.

Brown had 6 points throughout the game, while Noble had 5. The Lady Cats will now travel to Moultrie for the Vereen Rehab Christmas Tour, beginning on Monday, December 27 and lasting through Wednesday.