Christmas for Kids puts gifts under the tree for Xmas morning 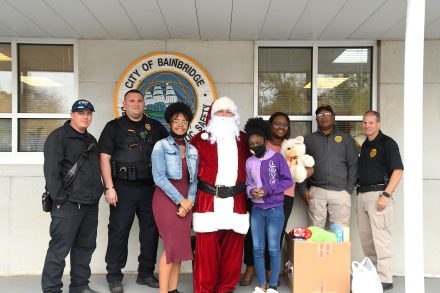 The Kids and Cops program has changed its name to Christmas for Kids. Pictured is the Williams family receiving their presents.

Bainbridge Public Safety’s Shop with a Cop program changed somewhat this year, now with the name Christmas For Kids, and actively partnering with local groups and businesses this year for toy donations. The donations received were so much that this year, not only was BPS able to provide for the 11 families in need that signed up, but an additional 12 families as well.

“This year was a good year,” administrative assistant Janette Mowry told the Post Searchlight. “We were able to help every single family that applied, except for those that weren’t eligible.” According to Mowry, there were more new applicants this year than ever before.

“We had an overwhelming outpouring of community donations,” Mowry continued. “We had the Board of Realtors, we had Bryan-Hight Vet’s office, we had the Dollar General store in I think it’s Climax,” she said. “We had a church in Attapulgus, the little 6 year-old, she’s handicapped in a wheelchair, she’s got rods in her back. She asked all of the parishioners in the church to donate toys, and they brought a boat-load of toys up here.”

“In the past, years previous, we didn’t think about community partners,” Julie Harris, public information officer for BPS, previously told the Post-Searchlight in an interview.

“We’ve just had an overwhelming amount of donations this year, more so than we’ve had in previous years,” Mowry said. “We have put it out there in the past for donations, but we’ve never had the reciprocations that we got this year in previous years. We’ve always had people that were nice enough to bring up donations, even individual families have brought gifts, because the children wanted to. But this year we had an officer’s wife that got the whole Board of Realtors to collect from all the realty agencies. It was just a massive amount of giving.”

BPS thanks everyone for their community support and knows it will provide for many Christmas morning memories for kids and families of all ages.