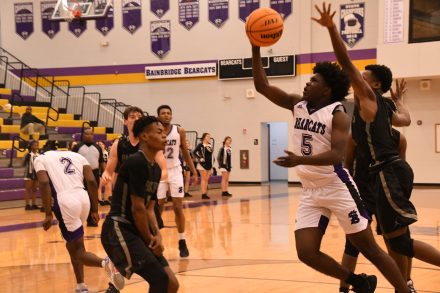 VJ Ervin (5) goes up for a layup, trying to avoid the Packers defense. KJ Cochran looks on in the background.

The Bearcats Basketball Team started off last week with a bang, beating the AAAAAAA Packers 60-44 at home.

The first quarter began slow with the Cats only scoring 12 points, while the Packers scored 8 points of their own.

Ashton Parris led the team in the first quarter, scoring 4 points, while VJ Ervin made a 3-pointer and AJ Grant made three points through a shot and free throw.

Zyrell Williams also was on the board with two points.

Heading into the second quarter, the Bearcats found their sweet spot, scoring 19 points, while the Packers were only able to get 13 points.

Cochran had a series of shots and a 3-pointer, while Parris scored five points.

Williams added to the total with a 3-pointer and Grant laid on another two points.

The teams then headed into halftime with the Bearcats leading 31-21.

Coming out of the half, the Packers attempted to catch up, scoring 15 points in the third quarter, but were no match.

The Bearcats scored an additional 13 points.

Ervin and Grant both had four points, while Dontae Broadnax and Deyon Bouie both found the net, giving them 2 points each.

Parris finished off the quarter with a free throw shot.

The game ended with the Bearcats scoring 16 final points.

Cochran scored six points through a combination of shots and 3-pointer, while Ervin and Parris both had 4 points. Grant ended the game with two final points.

Head Coach Jeff Page was proud of the win.

However, Page did see areas of the game he wanted to improve on.

“We get a lead, but then we get too many turnovers,” he said. “We have too many unforced turnovers where the other team isn’t even doing anything, and we just can’t do that.”

Despite this, Page still saw many bright spots, especially from Grant.

“AJ hadn’t previously shot the ball that much, but tonight he was in double figures,” Page lauded. “He’s found his sweet spot.”

Page said four of the players were in double figures for the night and he fully believes they can put away some other teams, if the turnovers are taken care of.

Following their win, the Bearcats then took on the Early County Bobcats on Friday night for Senior Night.

Dialan Beard was in double figures for the Cats with 10 points, while Bouie and Parris both had nine points throughout the game. Cochran ended the game with 8 and Grant ended the night with 7 points.

The Bearcats will now take on the Coffee County Trojans in Douglas on Wednesday, December 29 at 5:30 p.m.