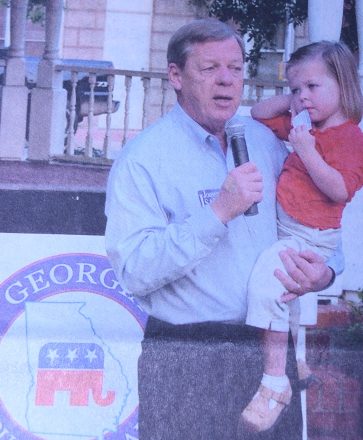 Rep. Johnny Isakson paid a visit to Bainbridge in 2004, where he could be seen holding Caroline Wells during a speech he gave.

Former Senator Johnny Isakson passed away Sunday, December 19, 2021, at the age of 76. While no official cause of death has been given, Isakson had retired from the Senate due to Parkinson’s disease.

Multiple politicians and public figures have since come out and given statements in the aftermath of the former Senator’s passing. Congressman Sanford Bishop released an official statement, saying, “Vivian and I were deeply saddened to learn of the passing of our friend, Johnny Isakson. I had the privilege of working with him and sharing a friendship for many years — first as colleagues in the Georgia Legislature and then in Congress during his time in the U.S. House of Representatives as well as the U.S. Senate.”

The statement continued, “Johnny was a champion for Georgia in Washington, D.C. We stood side-by-side in support of Georgia’s military bases, families, and veterans.

Johnny knew how to work across the aisle for all Americans and our country is better today for his service. My thoughts and prayers go to his wife, Dianne, and his family. He was loved loved by many and will be greatly missed.”

Tom McCall, president of Georgia Farm Bureau, said in an official statement, “We at Georgia Farm Bureau are deeply saddened by the death of Senator Johnny Isakson, who was a true gentleman and statesman. Our sympathies go out to his family and friends as they mourn his passing and celebrate his extraordinary life.”

Some of Isakson’s work for agriculture included co-chairing the Senate Chicken Caucus, as well as serving on the Subcommittee on International Trade, Customs and Global Competitiveness.

Chairman of Tea Party Patriots Action Jenny Beth Martin released a lengthy statement, saying, “I am saddened to learn of the death of former Senator Johnny Isakson. I have known ‘Johnny,’ as he was known to most Georgians, most of my adult life. He first became my Congressman when he filled the unexpired term of former Speaker Newt Gingrich in a special election in 1999. Later he became Senator. He lived up to the definition of a public servant.”

Martin’s statement continued, “The last time I remember seeing Johnny was again at the Atlanta airport. He was not walking as he had been in years past. This time in a wheelchair, but that wheelchair did not slow him down too much. I observed from afar the same affable demeanor he always exhibited as people walked up to talk to him. I heard him talking about politics, knowing people’s names and faces, and treating his constituents with his legendary customer service.”

Isakson once visited Bainbridge in 2004, on a campaign stop during his run for Senator. He was accompanied by then-governor Sonny Perdue, and campaigned on providing peace for the children of then to enjoy as adults.

As of the writing of this article, funeral arrangements have yet to be announced.