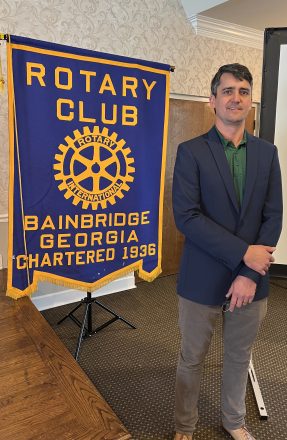 Gallagher Dempsey smiles after speaking with Rotary Club about how Southern Philosophy began and the brewing industry as a whole.

The Bainbridge Rotary Club gathered at the Bainbridge Country Club last Tuesday for their weekly scheduled meeting. The guest speaker for this week was Gallagher Dempsey, owner of Southern Philosophy Brewing.

Dempsey began by quizzing the attendees on some alcohol trivia, such as how many breweries were in the US in 1873 (the answer was 4,131). Dempsey then continued to talk about the history of the alcohol industry, including Prohibition and the various issues caused by it, sprinkling more bits of trivia in, such as the difference between an ale and a lager.

Dempsey then went on to discuss his own personal history, from his beginnings in Tallahassee, to meeting his wife, and how he eventually came to start Southern Philosophy. For Dempsey, brewing has been a passion since he was young. His friendship with Tyler and Heather Thomas would eventually lead him to Bainbridge, where he finally realized his dream of owning his own brewery.

For the next part of his speech, Dempsey then moved to statistics on Georgia breweries, with Georgia ranking 49 out of the 50 states in breweries per capita in 2016. However, the state ranked 15 in economic impact, largely thanks to bigger craft breweries in the Atlanta area. Part of the reason the state ranks so low in terms of breweries is due to strict laws, with Georgia ranking 48 out of 50 in terms of laws and regulations on breweries. However, in the years since these statistics, Georgia has jumped from having 69 to 130 breweries; this has only bumped the state brewery statistic up to 48 out of 50.

As with most businesses, COVID did a number on the smaller craft breweries, with many customers opting to buy at stores, though Southern Philosophy has managed to survive.

Another topic brought up was news from the Georgia Craft Breweries Guild, which is currently lobbying to raise the current 288-ounce limit on to-go alcohol sales, as well as against a law that forbids charitable donations of alcohol. Other issues facing craft breweries, according to Dempsey, include the three-tiered system, which consists of the retailer tier, the wholesale tier and the manufacturing tier, with most craft breweries falling into the manufacturing tier, which prevents them from things such as retail sales of alcohol. Dempsey closed his presentation taking questions from attendees.

Southern Philosophy Brewing is located downtown, at 114 E Broughton St, next door to the American.