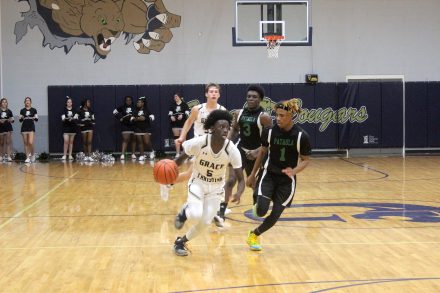 The GCA Cougars made huge victories against Pataula Charter Academy on Friday night, the girls winning 77-21 and the boys 99-62.

The GCA Cougars faced off against Pataula Charter Academy Friday night, with both teams claiming overwhelming victories, the girls winning 77-21 and the boys winning 99-62.

The first quarter was the best for the girls, as they scored a total of 28 points.

During the second quarter, Harrell scored the most with seven points.

Wells scored five points while Warr and Griffin both scored 6 points, and Kassidy Widner scored 2, giving the girls a total of 26 points for the quarter.

After half-time, the girls scored a total of 15 points in the third quarter, with Wells scoring 5 points.

Harrell scored 2 points, while Warr scored 4 with a pair of lay-ups; and Griffin and Savannah McConnell each scored 2 with lay-ups.

The girls closed out the fourth quarter with their lowest score, only scoring 8 points; McConnell scored 6 points with three lay-ups and Kennedy Singleton made a lay-up.

“We’ve been working on a lot of transition and fast-paced defense, and that’s what we did tonight,” Coach Lance Godwin told the Post-Searchlight. “For the last three weeks, every practice, every game, we’ve been working to this point. I’ve interchanged people, but tonight I kept five that’s been on the floor. They played hard, they play aggressively, had a lot of turnovers a lot of lay-ups.”

The boys started off strong in the first quarter, scoring 27 points total, with Jayfus Ferguson leading with 12 points.

The second quarter saw the boys score a total of 20 points. McKay led the team, scoring 6 points, with Kevin Brooks and Hathcoat right behind, scoring 5 points each.

Coming back from half-time, the boys had their lowest quarter, scoring 12 points.

McKay and Brooks scored 2 points with a pair of free throws, while Hathcoat scored a three-pointer.

The boys closed out the game with their highest quarter, scoring a total of 40 points.

“We have been working on trying to increase pressure on people with our athleticism,” Coach Travis Harrison said. “This is the first year I feel like we’ve really gotten the athletic advantage on some of the team’s we faced, so just trying to push the tempo has really worked out well for us.”

The Cougars will be traveling to Alabama on December 28-29 as part of their Christmas tournament. They will be away at Monticello on January 4, with their next home game not scheduled until Friday, January 7.