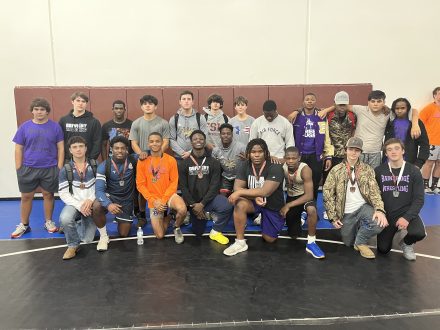 Wrestling season is in full swing at Bainbridge High School, with the BHS wrestling team traveling to Cook County last Saturday to compete in the Cook County Hornet Classic, where they came in third place.

The team has been wrestling since November, but had to start off with half of team, with football season still ongoing and keeping the boys preoccupied. The boys’ first opponent in November was Northside Columbus, before going on to compete at Florida High’s Cam Brown Seminole Classic.

“We finished as a team in third, but an undefeated day for Malcolm Spann at 126, whom is wrestling really well, and has the best record on the team at 16-1., said Coach Chad Smith in regard to the Hornet Classic.

“We have a veteran team this year, and we have started out really well,” Smith told the Post-Searchlight. “We hope to continue to get better through the holidays and make a run at region title in January.”

The wrestling team will travel to Valdosta this Friday and Saturday for the Wildcat Invitational.