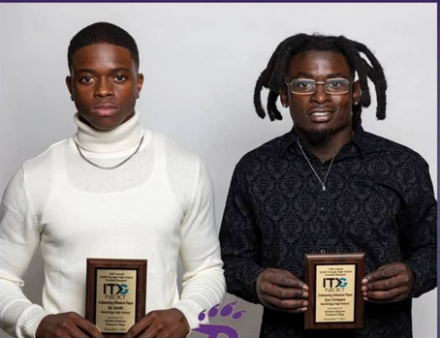 Chrispen and Smith were nominated by their coaches, while ITG finalizes the decision.

Chrispen said the awards banquet was for the Southwest Georgia area and highlighted the best athletes in the region.

Since the banquet, Chrispen said he has been invited to play in a senior game on December 19, that will have South Georgia facing off against North Georgia.

In order to play, Chrispen has to fill out an application, detailing some of his major plays and triumphs this season.

Chrispen said he wasn’t expecting the award or to be asked to play in the senior game.

“I wasn’t’ expecting it,” he said. “But, I know I’ve been putting my all into it. I feel like I grew in a lot of areas, and that was kind of exciting.”

Chrispen finished the season playing in 12 games and having 22 receptions for 455 yards and five touchdowns.

He additionally had one interception and 17 total tackles with one assist, making him the prime candidate for Outstanding Defensive Player.

Smith completed 128 passes this season for 2,087 yards and 22 touchdowns. He also had four rushing touchdowns.

Offensive coordinator, Mike Harville was at the banquet to congratulate Smith on all his accomplishments this season.