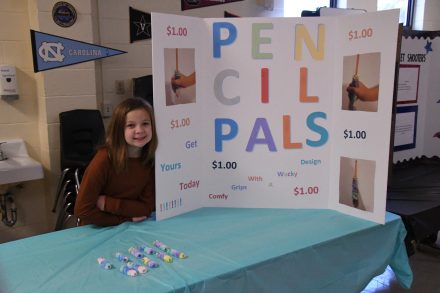 Braylin Warren was one of the students at the Merry Market, selling Pencil Pals- a pencil grip with a wacky design for two tickets.

QUEST gifted students at Hutto Elementary School participated in a Merry Market on Tuesday morning, where they sold handmade goods that they had worked on all of first semester.

QUEST director, Brandi Deal said the idea was for students to become their own entrepreneurs.

“They came up with every product here, this was all student driven,” she said. “They may have had some parent help along the way, but the idea was to have the students develop as much of it on their own as possible.”

Fifth grade gifted teacher, Portia Chavers informed shoppers at the Merry Market that this was the first year 3rd and 4th graders have had the opportunity to participate, as it was only opened to 5th graders last year.

“It’s a project that helps students learn about economics and economic standards,” Chavers said. “We want our students to see how much they’re going to actually make compared to how much they had to spend to make their project.”

QUEST students, along with homeroom students at HES were given 10 tickets. Each ticket represented 50 cents, and in order to buy a product from the Merry Market students had to dole out the correct amount of tickets.

Melissa Benton, 3rd grade gifted teacher, encouraged the QUEST students to look around the Market before making a purchase, as they were only allotted two purchases, in order to save products for the homeroom students.

When the homeroom students arrived, QUEST students were encouraged to really “sell” their products and explain to the students why they should purchase them.

One of the items up for grabs was made by 5th grade student, Alden Hill and called Pen Pals.

“I was looking for ideas with my mom for a few weeks,” she said. “Then, we were scrolling through Pinterest and saw something talking about putting stuff on top of pens, but it had flowers and stuff, so I wanted to do something a bit different.”

Hill then created Pen Pals, which are pens that have decorative feathers hot glued to the top, wrapped in sequin tape.

Another item that was a hot seller was created by 5th grade student Ella Hale.

Hale said that many times she will herself in the middle of a test, fidgeting, but isn’t allowed to have her fidget at school.

This dilemma prompted Hale to create jewelry students can fidget with.

Hale created necklaces, earrings, bracelets and rings for students to buy, ranging in price from one to two tickets.

Hale hoped to sell them all and have her income outweigh her costs.

Following the Merry Market, teachers had conversations with their QUEST students about how much income they made and what their expenditures were.

Overall, the teachers found the market to be a success, incorporating multiple subject matters into one project. 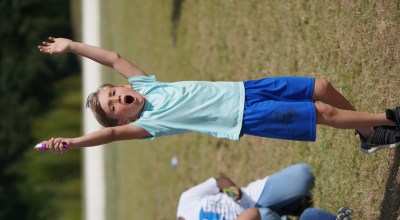