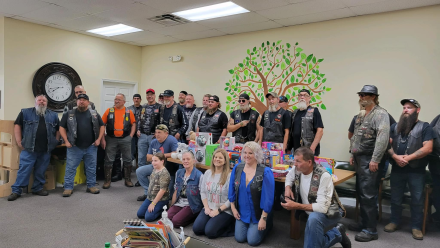 Motorcycle Club members pose with Amy Eakin at the Oak House on Saturday, after hosting a Toy Drive for two families.

Saturday morning, motorcycle clubs from across the south teamed up for a toy drive to benefit two local families.

Sponsored by the Ramaining Few Club out of Bainbridge, the Steel Horseman from Oakwood, Ga., the Iron Ravens from Wakulla, Fla., the Freedom Seekers from Tifton, Ga., the CMA from Cairo, Ga., and the Chrisitian Disciples from Sylvester and Moultrie, Ga. were all present for this annual toy drive.

According to Oak House Director, Amy Eakin, the toys brought by the various motorcycle clubs went to a family who recently lost their mother in a car accident and a family who lost their baby sister this year.

“We felt that both of these families needed a little bit of Christmas spirit,” she said. “We normally would’ve given to a foster child who didn’t have a sponsor, but we felt like these families had an immediate need.”

Eakin has worked with the motorcycle clubs for six years, doing various toy drives, but said the club always steps up when it comes to children.

Upon presenting the toys to Eakin, they also gave her a monetary donation, so she could go out and purchase clothes and shoes for the children.

Eakin then arrived at the homes of the families, who had no idea they would be receiving such a gift.

“They were very grateful and appreciative,” Eakin said.

According to Eakin, without the donations, one of the families would not have been able to have Christmas, while the other family would have had a very slim Christmas, if one at all.

Eakin thanked the motorcycle clubs for their continual kindness and willingness to help during such a busy season.

She also acknowledged that while Christmas is a time of need, anyone wishing to donate to a child or a family throughout the season can contact her at the Oak House at 229-309-1882 or come by her office at 1620 E. Shotwell St.

“There are always families in need,” she ended. “Not just during the Christmas season.”