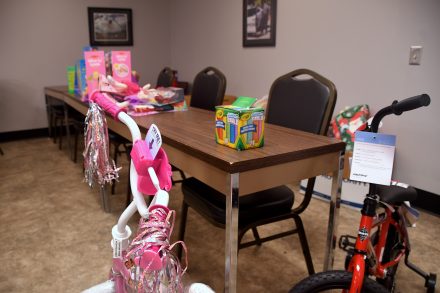 This Christmas is a time of change for the BPS Christmas charities, with Shop with a Cop undergoing a name change, and BPS partnering with various groups and businesses in the community to collect toy donations.

“In the past, years previous, we didn’t think about community partners,” Julie Harris, BPS public information officer, said in an interview. “We did a toy drive and said ‘Drop your toys off here.’ What we found was that some businesses in town kind of did their own thing, like all the employees brought in toys, and then they called and said, ‘Hey, we at First National Bank have been collecting toys,’… So we said ‘Hey, maybe the community wants to be involved in this.’”

The deadline to drop off toys for the drive is next Wednesday, December 15.

In addition to this new attempt at partnership, Shop with a Cop has now changed its name, now known as Christmas for Kids. This is due to the nature of the program changing, with families no longer going on a shopping spree with the officers. Rather, now families provide a wish list to officers, who go out and buy the gifts, and then distribute them to the families. According to administrative assistant Janette Mowry, COVID restrictions last year caused these initial changes.

“We changed the process last year because of COVID, and it worked out so well that, since COVID is still here and the flu season seems to be dropping on top of everybody, we decided that this year it was probably a good idea to keep it that way,” she said. “That way we don’t have hordes of kids that are in the program and all the officers out, running all over the store, wreaking havoc, possibly getting sick from everyone being together.”

Applications closed November 19, though there was one last minute addition, the Kelley family, whose house recently burned down. The Salvation Army’s Angel Tree program had already closed eligibility, so BPS coordinated with the Salvation Army to get the family on the list for Christmas for Kids.

Both Christmas for Kids and the toy drive will be distributing toys on Monday, December 20.