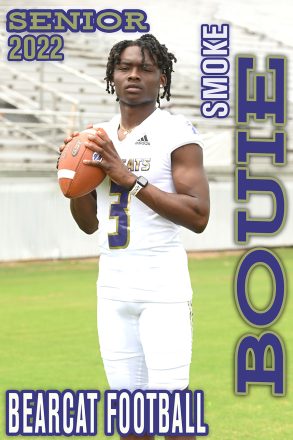 Smoke Bouie was named All-American and is set to play in their Bowl Game in January.

Senior Texas A&M University commit, Deyon “Smoke” Bouie was recently named an All-American in football and officially honored in a virtual jersey presentation. He will now go on to play in the All-American Bowl at the Alamodome in San Antonio, Texas on January 8, 2022.

The game will feature some of the best high school all-star athletes across the eastern and western United States.

Bouie said he is on an all-time high right now, after being named All-American.

“I’m the first in Bainbridge history that I know of,” he said. “It means a lot to me and my family, so it’s a big moment to cherish.”

Bouie said he was named an All-American as a freshman and has since been working hard to stay on “the road to glory.”

One of the many things Bouie has to look forward to now that he has been named an All-American is the opportunity to be featured on NBC Sports’ Road To the Dome Digital Series.

The Road to the Dome Tour honors all 100 All-Americans with virtual jersey presentations during a 15-episode series.

The episodes will be released weekly through various digital and social platforms across NBC Sports.

Bouie was initially supposed to receive his digital jersey on Wednesday, December 8, but instead was on the courts for the Bearcats playing basketball. He has since completed his interview and said his episode will premiere the day of his signing, December 16.

While Bouie is thrilled for this opportunity, he wishes his cousin could be here for it.

Bouie’s cousin, Anthony Crosby, Jr., was a huge supporter of the Bearcats, and especially of Bouie’s football career.

Unfortunately, Crosby was the victim of a gun violence in early November and succumbed to his injuries.

“He always encouraged me to do better,” he said. “He would come to the fence and talk to me at every game.”

During the last playoff game of the season, Bouie even painted Anthony’s nickname “Antz” on his cleats.

While Bouie said he won’t be repping those cleats at the All-American Bowl, he said he does hope to wear his pink breast-cancer cleats in honor of his late grandmother, who passed from breast cancer.

Bouie hopes to keep the spirit of his grandmother and cousin alive and thanks everyone for their support throughout the past four years. He ended by saying he looks forward to representing Bainbridge in the All-American Bowl Game.

Cougars get victory over Emmanuel