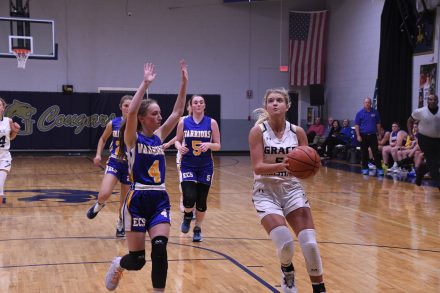 Ella Harrell preps for a shot as Warriors attempt to block the ball from going into the net.

The Lady Cougars started the first quarter off hot with Zoe Wells scoring 11 points and Lainey McRae scoring six points. McRae’s first two points led her to scoring her thousandth point, which was then celebrated by presenting her with a basketball signed by all her teammates and coaches.

This milestone only encouraged the Lady Cougars more.

Ella Harrell then made 4 points, while Katherine Griffin made a layup, giving the Lady Cougars a total of 23 points in the first quarter, while Emmanuel was only able to score 8 points.

Headed into the second quarter, Wells netted back-to-back three pointers, and an additional one later in the quarter, giving her nine points.

McRae also scored 9 points, making a combination of shots, along with making a free throw.

Harrell, Griffin and Kassidy Widner finished off the quarter with 2 points each, making the total 24 points scored in the second quarter.

Coming out of halftime, Harrell led the team in points in the third quarter. She had five points with a combination of shots, layups and a free throw. McRae followed her up with four points, while Chloe Brodgdon, Mary Glenn Warr and Wells all had two points.

Widner made one point through a free throw, giving the team 18 points for the third quarter, while Emmanuel only scored 2 points.

McRae led in the fourth quarter with 4 points, while Harrell, Ali Roberts, and Savannah McConnell all had two points, finishing off with a total of 10 points in the final quarter, while Emmanuel had 8 points.

McRae tallied the most points throughout the night with 23, while Wells came up one point behind her with 22. Harrell had 15 points total.

Both McRae and Wells also made 100% of their free throws, along with McConnell.

Coach Lance Godwin was proud of the win.

“We played very good, aggressive defense and kept them off the three-point line,” he said. “We got all the turnovers and most of the loose balls and capitalized on those turnovers.”

Godwin said this is something the team had been focusing on. He really emphasized the importance of getting the rebound and then making it to the net.

The team will now head off to Albany on Friday to play against Byne, where they are hoping to bring home another win.