Cougars get victory over Emmanuel 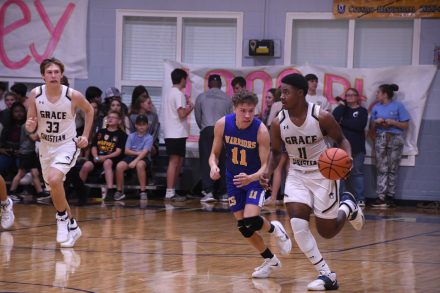 Jafus Ferguson looks for an open player to pass the ball to, while a Warrior is quick to defend.

The Grace Christian Academy Cougars took to the court on Monday night to face off against the Emmanuel Christian School Warriors. The Cougars ultimately won in a final score of 79-57.

Kevin Brooks started the night out strong for the Cougars, scoring 11 points in the first quarter. He made a 3-point shot, along with a series of shots and layups.

Corrin McKay and Carter Hathcoat followed up Brooks’ 11 points with seven points of their own.

Jafus Ferguson added to the total with four points, while Keith Eidson and Dawson Worsley netted two points each.

Hathcoat had a strong showing in the second quarter with seven points, making a 3-pointer and two layups. Worsley helped out Hathcoat, having six points of his own, while Ben Faircloth made a 3-pointer, and Ferguson rounded out the quarter with 2 points.

The Cougars headed into halftime with a 51-20 lead over the Warriors.

Coming out of halftime, Hathcoat and Ferguson continued to find the net, scoring six points each. Hathcoat went back-to-back on the 3-pointers, while Ferguson had a 3-pointer, layup and free throw.

Brooks followed up with five points of his own, while Edison contributed 3 points to the team’s total of 20 points in the third quarter.

The Cougars finished out the last quarter of the game with a few last minute points.

Faircloth rounded out the game with five points, while Eidson made a 3-point shot to close out the victory.

Hathcoat had the most points throughout the game with 20, while Brooks followed him up with 16.

The Cougars will now head to Albany on Friday to face off against Byne.