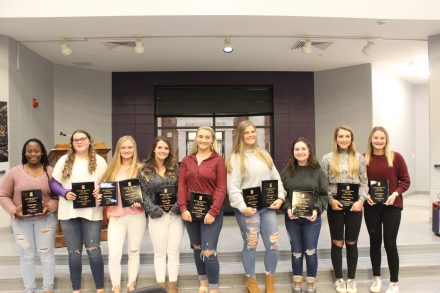 The Banquet began with the middle school program.

“To say we’ve had some bumps and bruises along the way would be a major understatement,” said Coach Rick Lewis. “Through it all, though these girls made it to every practice and got better day by day.”

Lewis said he explained to the team that it’s not where they start, but where they finish.

“As the season was winding up, they finally started to see the fruits of their labor,” he said. “I can only imagine what the next seasons hold for these ladies; they have some real talent.”

Lewis then handed out individual awards.

Emma Dollar was the recipient of the MVP Award and Gibbs Palmer received the Highest GPA Award.

Lewis finally handed out the Most Improved award to Da’Nydia Campbell.

“This is an award I didn’t take lightly,” he said. “I literally watched this young lady improve every single practice; you wouldn’t recognize her from the day she came out to tryouts to her final game.”

The last award was the Coach’s Award, which was given to Katelyn Williams.

“This year, this young lady did everything I asked her to, and did it with a smile on her face,” Lewis said. “It didn’t matter if she was tired, she did it for the coaches and her team.”

Lewis then turned it over to Lady Cats Varsity Coaches Christopher Bryant and Rex Wade.

“This was an interesting season for all of us,” Bryant said. “We didn’t know if we would be coming back day-to-day, but I can say all the girls involved in this program showed up every day and practiced like it would be their last, and when you have a group of girls like that, the sky is the limit.”

Bryant went on to say the team improved day by day, and the team was putting in work before and after practice.

“I can’t tell you how many days me and Coach Wade may be working on a project, but the girls got dressed and started practicing without having to be told,” Bryant said. “When you have a group you don’t have to tell every little thing to, it shows they’re committed to excellence and to this program.”

“It’s hard when you have a group like this narrow it down to individuals, because there’s no individual up here; they do everything together, and they are a team,” he said.

Brenna Conley was named the MVP.

Kristin Bennett received the award for Most Improved and Kailyn Wilson was awarded with the Highest GPA.

Bryant then presented the Coach’s Award to Wilson as well.

“This kid came to practice no matter what was going on with a positive attitude,” Bryant said. “She’s an all-around incredible athlete and student.”

Bryant went on to the name the All-Region team, noting the Lady Cats came out on top.

The All- Region 2nd Team consisted of Haylee Nix and Destiny Woodard.

The final All-Region Award was the Region 1-AAAA Player of the Year, which was awarded to Cannon.

Seniors Wenda Shefield, Cannon, Purvis and Wilson were then given a round of applause.

“These ladies have been in the program as long as I have,” Bryant said. “This class was my starting class, and what a ride it has been. I consider them like my children; this is truly an amazing group of young ladies and it has been an honor and privilege to coach y’all.”

Bryant ended by thanking the parents, sponsors, and scoreboard operators for making the season possible.