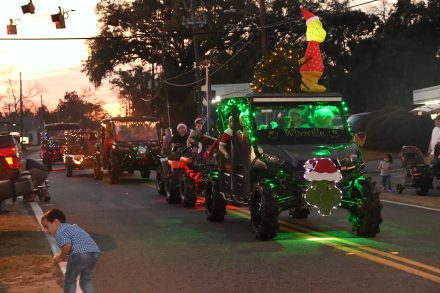 Decorated buggies, golf carts and ATVs made their way through Climax as part of the city’s first Christmas Golf Cart Parade.

While holiday festivities like caroling and the Yuletide Jubilee have been a part of Bainbridge for years, other communities are trying to start their own annual holiday traditions. This past Saturday, the city of Climax, in addition to having their first Christmas tree lighting ceremony in years, held their first Christmas Golf Cart Parade, which Mayor Joseph Kelly is hoping to make an annual event.

“When I became mayor, I said I wanted to try and bring that tradition back,” Kelly said. “This year I said, ‘What can we add to it?’ Since we’re a golf cart community, I figured we’ll have a golf cart parade.”

In addition to the lighting of the Christmas tree and the parade, Santa Claus made a visit, and attendees could visit some of the local vendor booths set up, while children could get their face painted. People who decorated their golf carts for the parade could enter them in a contest, with Brandy Jackson, Ricky Moore, Hali Moore, Alana Jackson and Saydee Moore coming in first place.

According to Kelly, the turnout was over 150 people, and the reception to the festivities was very positive.

“We’ve had people saying ‘Thank you for bringing this back,’” he said. “People said they remember their parents and grandparents driving the floats at the Swine Time Parade, and they were the kids in the parade. Now the roles have kind of reversed, and it’s their kids and grandkids in the parade. It’s generational.”

“I pitched the idea to our City council. They loved the idea and we moved forward with it,” he said. “It is our hope for the parade to be a yearly thing. We are excited and already brainstorming for next year’s Climax Golf Cart Christmas Parade.”