Woman reunited with donkeys after they were stolen 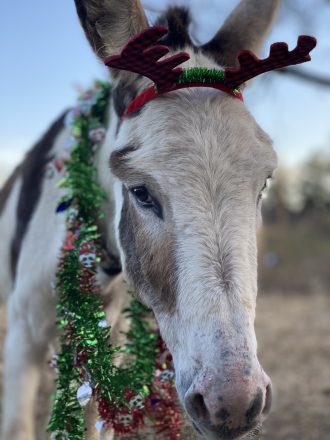 Haley Humphrey was reunited with her donkeys on her birthday, after they were stolen by Ryan Scribner.

Ryan Scribner, who was previously arrested in 2019 for cruelty to animals, is under arrest again for additional animal related charges: livestock theft.

According to reports, Haley Humphrey contacted Decatur County Sheriff’s Office Cpl. Jordan Phillips on November 13, stating that five of her donkeys were missing from her address on Boyett Road.

Humphrey told Phillips she had been out of town taking family members to the doctors, and upon returning home she noticed her donkeys were missing. Humphrey described the donkeys as a mama and baby white donkey with black patches, a large and small brown donkey and a tan Jerusalem donkey as the ones in question.

Phillips advised Humphrey that on November 8, he had been dispatched to the area of Antioch Church Rd. and Boyett Rd. in reference to donkeys being out in the road. Phillips told Humphrey those donkeys were placed in a pasture on Antioch Church Road.

Phillips then offered to take Humphrey to the pasture to see if she could identify any of the donkeys as hers.

Upon arriving at the pasture, none of the donkeys could be located.

Phillips then contacted the owner of the pasture, Adell Phillips.

Adell told Phillips that earlier that morning a truck pulling a horse trailer arrived at the pasture, but she didn’t recognize the vehicle. However, she believed a man known as Ricky Musgrove, might.

Phillips made contact with Musgrove, who provided a number to the man that leased the property, Buddy Rentz.

Rentz told Phillips he allowed Scribner to place his livestock in the pasture.

Officers said they do not believe Rentz knew of Scribner’s previous arrest for animal cruelty.

Phillips tried to make contact with Scribner, however Scribner would not respond.

The case was then turned over to Investigator Charles King.

King said Scribner would not respond to him either, so he went to Scribner’s home, where Scribner admitted to stealing and selling the donkeys.

King questioned Scribner, who explained he stole the donkeys because they were in his pasture.

King informed Scribner that under Georgia code, officers and deputies are to impound livestock running astray, and the owners and operators of the place impounding the livestock can charge the livestock owner for impoundment.

Scribner told King he had already sold two of the donkeys to Randall Peters of Hisway Farm and Exotics in Bell, Florida for a high-dollar amount.

King then arrested Scribner with five felony counts of livestock theft and one count of probation violation.

He then contacted Peters and went to retrieve Humphrey’s donkeys, along with find the others.

“We finally have them all returned,” King said. “It took a lot of work; these were not your average donkeys. They are very special to Mrs. Humphrey; they are like her children.”

Humphrey has since been reunited and spent her free time getting her donkeys ready for the cold weather and holidays, sending out their annual Christmas cards.