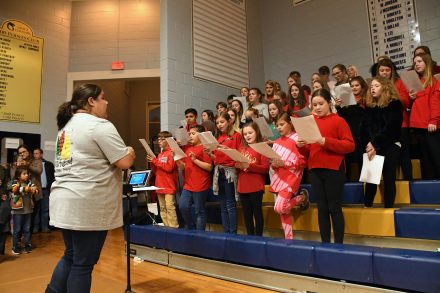 Crowds gathered at Grace Christian Academy this Tuesday night for the school’s 20th annual Winter Festival. Rides were set up on the playground, while people gathered in the gymnasium for food, raffles and auctions, while a small section called “The Cougar Art Gallery” sold Christmas decorations made by GCA pre-K and elementary students.

Some of the items up for auction included a Heritage 22 long rifle (donated by Lance and Allie Godwin), a PlayStation 5 (sponsored by Sterling IT and Jay P Evans Furniture Co.- Badcock & More), a goldendoodle puppy (donated by Dream Puppies of Dothan and supplies donated by Petsense), and a pair of SEC tickets to the Georgia-Alabama game (sponsored by Hunt Industries and PMI). In total, the school raised $70,000, with total profits calculated in the high $60,000 range.

Having been started back in 2000, this would have originally been the school’s 21st Winter Festival, had last year’s festival not been cancelled by the pandemic.

“A few people said they were glad to have it, that they missed it,” said Kellie Dollar, public relations for GCA and organizer of the Winter Festival.

According to Dollar, she and the volunteers who organize the event usually begin planning it between two to two-and-a-half months in advance, but due to concerns COVID may shut it down this year, they only had six weeks to plan this year.

“It’s amazing what God can do with eight volunteers,” Dollar said. This year was also the most profitable Festival so far. “We kind of had said we weren’t going to focus on how much we could raise for the school, but on putting on an amazing event for the community,” Dollar said.

While attendees bid and grabbed food from the concession stand, GCA music teacher Krystal Apke conducted her choir of students in an array of Christmas songs.

In addition to the auctions and rides, attendees could take a chance and enter the Festival’s treasure chest contest, where participants purchased a key to a cabinet containing three pieces of jewelry, supplied by Bishop’s Jewelers of Donalsonville. The contest allowed contestants to purchase keys from a pool of over 100, with only one key being the true key to the cabinet; the winner would then be allowed to pick one of the three pieces of jewelry. After almost every other contestant had tried and failed, Bennett Earnest ultimately won.

“I would like to thank everyone who helped plan, prepare and came to the event and made it successful,” Dollar said. “Without them and God we couldn’t have made it possible.”

Woman reunited with donkeys after they were stolen