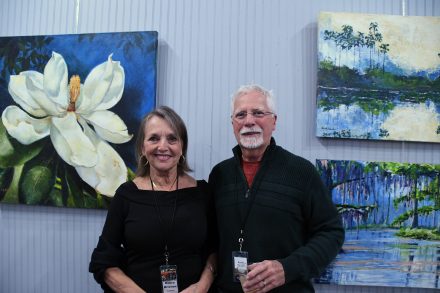 Husband and wife art duo Randy and Debra Brienen were featured in the Firehouse Art Gallery this past Thursday.

While crowds gathered downtown for the Yuletide Jubilee Thursday night, others walked a block over to the Firehouse Arts Center to see the gallery’s latest exhibit, featuring the works of Randy and Debra Brienen.

Born and raised in central Illinois, the pair met in high school, coincidentally in art class. They had three children, before moving their family to Tallahassee in 1982. While Randy was an art major in college, the couple never made a commitment to it until 2006.

“I tell people the only thing that got me back then was a trip to Vietnam,” Randy joked about his major, which he ultimately didn’t finish; both he and Debra are self-taught.

However, life-changing news caused the couple to look at art more seriously, when Debra was diagnosed with cancer in 2006.

“My first thought was, after the cancer, was ‘Oh my gosh, I always said I was going to paint, and if this is it, I want my kids to have some art’,” Debra said. “So I started, while I was going through chemo and radiation, I started painting like crazy. The next year somebody saw my art and they encouraged me to start marketing it, and I did.”

After seeing the success his wife had with her painting, Randy decided to join in; “I saw that she was selling some paintings, so I thought ‘I need to get in on this!’” he said.

Debra was able to overcome her cancer, and has been cancer-free for 15 years.

“Here we are in our retirement years, enjoying life with the joy of painting,” Debra said.

The Brienen couple also donate a portion of each art sale to the prevention and treatment of cancer.

The pair initially began coming to Bainbridge for the restaurants, and eventually discovered the Firehouse. According to Randy, after the pair participated in a regional art show three years ago, they were invited to come back, ultimately scheduling Thursday’s exhibit.

“Thank you to the community for embracing us,” Randy said. “It’s a great venue, a lot of history here, and we’re just very thankful for the opportunity to show our art.”