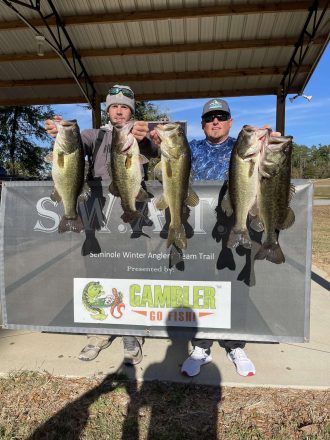 Boats launched from Big Jim’s this past Saturday morning, trolling Lake Seminole for bass in the hopes of winning the Seminole Winter Angler’s Trail. Anglers were permitted to go anywhere on the lake, and had a five-fish weigh-in limit. According to head organizer Chuck Laslie, there hasn’t been a trail like this hosted here in years. Contestants were allowed to fish from first safe light until 3 p.m. . Local anglers Griffin Long and Matt Baty came in first place and claimed the $800 prize, with a total combined weight of 27.43 pounds, followed by Bradley Enfinger and Robert Tindell in second, with a total weight of 26.43.

“It’s awesome,” Long said of the competition. “You never know if that next cast is going to be that big fish.”

According to Long, who fishes as a hobby, he had initially planned on going on a guided fishing trip with Baty, operator of Matt Baty Fishing, but neither were able to work out a time to meet.

“We never could set a date, so he asked if I’d fish the tournament with him, kill two birds with one stone,” Long said.

The pair caught 30 fish over the weekend, but kept the allotted five, with several large fish requiring a culling balance beam to determine which were worth keeping. The largest fish Baty and Long caught weighed in at 5.77 pounds, while Enfinger and Tindell caught the heaviest fish, which weighed 6.22 pounds.

“Get out there and fish,” Long encouraged. “Lake Seminole is on fire this time of year. If you’re looking for a guiding service, Matt Baty is the best there is.” Baty echoed this sentiment, mentioning how bass are currently feeding in preparation for winter. “This is the absolute best time of the year for bass fishing on Lake Seminole,” he said.