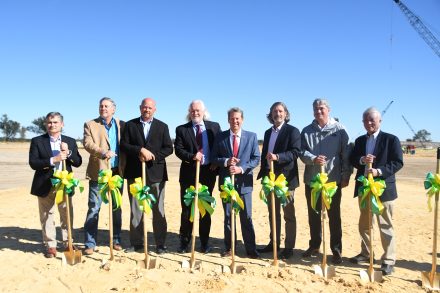 Monday afternoon marked a milestone achievement for Danimer Scientific, as they broke ground on their new 2-million-square-foot facility, which will be an expansion of their 25-acre campus, already located in Bainbridge.

To celebrate this achievement and the $700 million expansion, state and local officials, such as Gov. Brian Kemp and Congressman Sanford Bishop were present, offering their congratulations.

Danimer’s Chief Operating Officer Michael Smith opened up the groundbreaking ceremony with a few words about the company.

“Danimer was founded in Decatur County, so it’s altogether fitting that we would have a facility in Decatur County beyond the facilities we already have,” he said. “To have a world class chemical plant in Bainbridge and Decatur County is something we are really excited about.”

Smith then thanked everyone who made the project possible, including Senator Dean Burke, who then spoke and introduced Gov. Kemp.

“Our leadership in Decatur County has typically been fiscally conservative and made good decisions with the taxpayers’ money, which has allowed them to go after projects,” Burke said. “Danimer’s expansion is just one of the latest success stories.”

Burke then introduced the 83rd Governor, Brian Kemp, pointing out that Kemp has put an emphasis on rural Georgia, keeping his promises to grow businesses, expand rural Broadband and make a change in rural healthcare.

Kemp was met with a standing ovation, as he thanked Burke for his kind words.

“I’m excited to be here today,” Kemp said. “This is such an exciting time, not only for this part of the state, but the state as a whole. It really builds off of the things we’ve been talking about for a long time.”

Kemp went on to say that the project was a success due in part to the leadership not only at the state level, but locally, through Chairman Pete Stephens, Rep. Joe Campbell, Development Authority Director Rick McCaskill and multiple others.

“All of these folks help us do good on economic development, and today’s events prove that job creation, business and the economy are booming in the peach state,” Kemp said. “Our success is a team effort that starts with a great economic development team at the state level and close partnerships at the local level.”

Kemp discussed how Georgia has become a mecca for growing businesses this past year, despite a recent global pandemic.

Kemp provided statistics of how well Georgia is doing, in fact.

“Over the last year, Georgia’s overall economy added 200,000 new jobs,” Kemp said. “When we break ground today, we are not only getting to witness Georgia’s strong business environment, but also community involvement.”

Kemp acknowledged it was difficult to keep the project on track in the face of COVID-19, but since the original expansion announcement in March, Danimer has worked tirelessly to grow their company, most recently announcing their partnership with Mars Wrigley to make compostable wrappers for Skittles packaging.

“This is truly a cutting edge thing that will not only help our state, but the world and I’m happy I get to be a part of it,” Kemp said.

Ending his address, Kemp turned it over to Danimer Scientific CEO, Stephen Croskrey, who looked back on the milestone.

“15 years ago, Danimer Scientific was a small, unheard of company in Bainbridge, Georgia,” Croskrey said. “Today, we are listed on the New York Stock Exchange and are a recognized world leader in the fight to stop plastic waste.”

Croskrey acknowledged this transformation wouldn’t have been possible without the hard work of several individuals who helped raise money to fund the company.

“They did it because they believed in a better future and believed Danimer held the solution to end plastic waste,” Croskrey said.

Croskrey then recognized an extremely special individual, who laid the groundwork and intellectual property for Danimer Scientific in 1989, Dr. Isao Noda, before thanking other employees who had given their time, money and dedication to the company over the years.

“Thank you to everyone who has supported us,” he said. “Make no mistake, there is still plenty of work to be done, but we are fighting on the side of what is right.”

With that, Croskrey encouraged the crowd to end plastic waste, beginning with the groundbreaking of their new company.