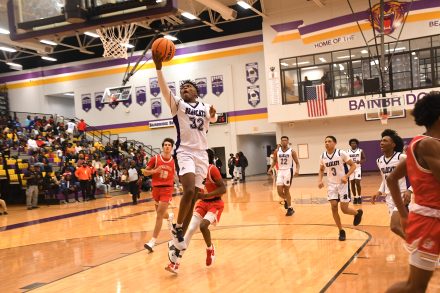 Ashton “Dooda” Parris (32) shoots a layup in the game against Thomasville on Saturday night.

In a complete nail biter, the Bearcats Varsity Basketball team won their first home game against the Thomasville Bulldogs 55-54.

The Bearcats started the first quarter, scoring 9 points, while the Bulldogs scored 10.

Ashton Parris led in the first quarter with 4 points, while Zyrell Williams had 3 points and Dialan Beard had two points.

The Bulldogs continued their lead into the second quarter, scoring 14 more points, while the Bearcats were able to make 10 points.

Williams and KJ Cochran both had three points.

Williams made a 3-point shot, while Cochran had a layup and a free-throw.

Beard and Amarion Ford both were able to score two points.

During the third quarter, the Bearcats amped up their defense and went neck and neck with the Bulldogs.

The Bulldogs outlasted them, scoring 15 points, while the Bearcats scored 14 points.

Williams was on fire, making two 3-pointers, while Beard and Parris made 3-pointers as well.

It all came down to the 4th quarter, when the Bearcats were able to claw their way back up to the top with 22 points, over the Bulldogs’ 15 points.

VJ Ervin was the star of the fourth quarter, scoring 11 points from primarily free throw shots.

The guard made one three-pointer and 8 free-throws to give the Bearcats the win.

Right behind Ervin, Parris scored 7 points of his own with two layups and one 3-pointer.

Cochran and Williams both finished the game with two additional points.

Cochran made two free-throws, while Williams made a layup.

Following the close victory, the Bearcats traveled to Palm Coast on Monday afternoon, where they were once again victorious, winning 57-49.

Both teams came out, scoring 12 points.

Ked Bryant led off with four points, making a layup and two free-throw shots. Ervin and Williams tacked on an additional six points to the scoreboard with both of their 3-pointers.

Parris closed off the quarter with a layup.

Headed into the second quarter, the Bearcats were all gas and no brakes, scoring 20 points, while only giving up 12 points to Palm Coast.

Parris led the team with 8 points, making four layups. Cochran and Beard followed Parris’ lead with six points of their own.

Cochran had three layups, while Beard had a 3-pointer, layup and free throw.

Coming out of halftime, Palm Coast was able to score 15 points on the Bearcats. However, the Bearcats still netted nine points.

Cochran, Beard and Bryant all had three points.

Bryant and Beard both shot 3-pointers, while Cochran had a layup and made a free-throw.

The Bearcats closed out the game with 16 points.

Williams made a 3-pointer, while Ervin shot a layup and made a free throw.

Beard and Bryant both finished with 2 points, making a layup and two free throws.

Coach Jeff Page was proud of both the wins and said he’s happy to be 2-0.

The Bearcats will now play Early County in Blakely on Tuesday, November 30 at 6 p.m.