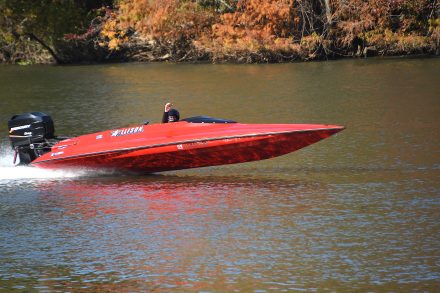 Drag Boat racers took off on the Flint River on Friday and Saturday afternoon.

The Boat Basin saw a crowd of between 50 and 60 spectators gather this past Saturday for the season finale drag boat race for the Outboard Drag Boat Association (ODBA).

Drag boat races were initially put on at the Earle May Boat Basin by the volunteer fire department, however they have since stopped. The event is now primarily in the hands of Randy Harrell, a Bainbridge resident, who is a world champion boat racer himself, and a Board member of the ODBA.

“I put it on pretty much by myself,” he told the Post Searchlight in an interview.

The event took several months to plan, and saw racers come from all across the United States, from Texas to the Florida Keys, and even as far away as Ontario, Canada. There were six different race classes, with the winners as follows: Supermod 1st, Randy Harrell; Promod 1st, Jeff Tyner; Pro Stock 1st, John Harrison; V-6 Pro 1st, Ed Trobridge; Unlimited 1st, Steve Kimball; and Lake Racer 1st, Justin Brooks.

The event serves as a fundraiser, with money raised going to local school fishing teams, but Harrell stated that he hopes to turn this into something bigger than a mere race. “We intend to do so in the future, to turn it into a family-oriented outdoor festival.”