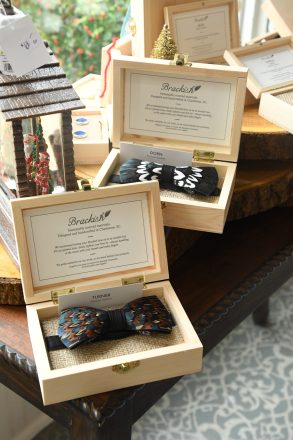 Handmade feather Brackish bow ties are a must have.

Resident artist Ashley Long has a new roommate in his studio space: 229 Gifts.

229 Gifts, a branch of the Bainbridge Pharmacy gift shop, has opened a pop up shop in the square at the former location of Maiden South.

The shop is being run by Renee Fisher, who joined Bainbridge Pharmacy and 229 Gifts a little over a year ago.

“I have a store in Tennessee called White Street Market, but I joined Edward (Reynolds) a year ago to oversee branding, buying and marketing and work with him on the Colquitt Store,” she said.

While working with Reynolds, Fisher spoke with him about the opportunities happening downtown. They then decided to open a pop-up shop under the umbrella of Bainbridge Pharmacy.

“We are so proud of downtown and what’s going on, and we just love meeting new people and showing them what we have,” Fisher said. “We really have seen it drive traffic from the flagship store to downtown and vice versa.”

229 Gifts does not carry everything Bainbridge Pharmacy offers, but has several items exclusive to the area.

“It’s a really nice collection of things to offer to the community,” Fisher said.

The pop-up shop got a lot of attention for its amazing selection over the weekend during Downtown’s Holiday Open House.

“The feedback was great,” Fisher said. “Customers were so excited to see us down here and we got to meet a lot of new people, which was the goal.”

Currently, 229 Gifts gets in new items every week, which is why Fisher suggests checking out the store on a regular basis.

“The inventory will always change,” she said.

One of the new brands available is Brackish, which is handmade in Charleston, South Carolina.
“We love, love, love having that,” Fisher raved.

229 Gifts also carries Little Birdie pillows, which are handcrafted in the USA.

Those aren’t the only items unique to 229 gifts; the store carries tea towels, a variety of ornaments, lounge-wear, blankets and specialty candles.

“We are just super proud to have these brands and introduce them to Bainbridge,” Fisher said.

For those who may want something a little smaller, 229 Gifts also offers delicious cheese straws made locally by Pine Street Kitchen and Claudia Hutchins.

Fisher said she is so thankful everyone Downtown has been so welcoming.

Based on the current feedback and momentum, Fisher would love to have 229 Gifts open a pop-up shop annually around the holidays in Downtown.

“We would absolutely love to do it again, but we are just taking it day by day,” Fisher said.

229 Gifts is currently open Thursday-Saturday, but Fisher said they will change their hours as the holidays get closer.