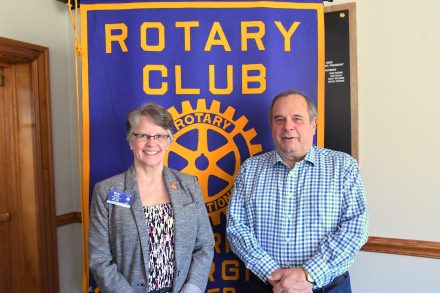 The Bainbridge Rotary Club met at the Bainbridge Country Club this Tuesday for their weekly meeting. This week’s scheduled speaker was Rotary District Governor Mary Ligon, who spoke on several aspects of Rotary’s mission.

According to Ligon, Rotary’s official vision is, “Together, we see a world where people unite, to create lasting change, across the globe, in our communities, and in ourselves.”

Ligon then spoke about the four strategic action priorities of Rotary, beginning with an example, Rotary International’s efforts to eradicate polio. According to Ligon, “That is what we are known for as Rotarians worldwide. It is our number one service project, and we’re going to finish it.”

She went on to state that, earlier this year, they had only encountered two cases of polio, and that only two more had been found within the last week.

The strategic action priorities discussed specifically included: what local Rotary clubs can do to increase their impact, how to expand membership, how to enhance participant engagement, and increase Rotary’s ability to adapt.

Ligon made a point to focus on expanding membership, saying, “I would encourage you to think about what would work for this club that would allow you to attract more people to come and join you, and be part of Rotary, so that you can have a greater impact.” She continued, “Because what we’re really about is ‘Grow more to do more… because the more hands we can have, the more we can accomplish, the more we can do, the greater impact we can have.”

Ligon also mentioned Rotary’s need for growth, saying, “Every club on average loses 10 to 15% of their members every year… So you’ve got to plan for how are you going to replace those folks that are moving away, or are just aging out, whatever the case may be, plus some.”

Other topics discussed included the various charities Rotary is involved with, as well as the Rotary District 6900 Conference scheduled for April 28 through May 1, 2022, in San Destin.