PICK SIX FOR THE WIN 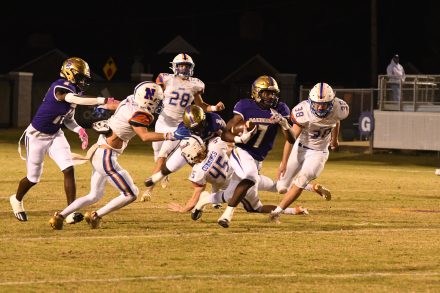 Keenan Phillips makes a 10-yard run for a touchdown. He had 13 carries for 136 yards throughout the night.

It was a full moon brawl on Friday night, when the Bearcats hosted the second round of the state playoffs at home against the Northwest Whitfield Bruins. The Bearcats ultimately came out victorious in a resounding 48-7 victory.

Zye Chrispen opened up scoring in the first quarter with 2:55 left. He caught a 35-yard touchdown pass from Quarterback Bo Smith, following a drive of 58 yards over 7 plays.

Blake Fagan then attempted the extra point, but the kick failed.

Just as the clock was winding down, Antavious Murphy got a pick six.

He made a 58-yard interception return with only 1:26 left in the quarter.

Nicholas Tyre made the extra point, giving the Bearcats a 13-0 lead.

Early in the second quarter, Deyon Bouie caught a 45-yard touchdown pass from Smith with 11:53 still left in the half. It would be the first of three touchdowns he would make throughout the game.

Following Bouie’s touchdown, Keenan Phillips made a 10-yard run after a drive of 48 yards over two plays.

Tyre made the extra point with 3:30 left on the clock.

The Bruins finally found the end zone near the end of the second quarter with 2:40 left.

Grant Holder made the extra point, leaving the Bruins trailing 7-27.

With only 10 seconds left on the clock, Bouie made another touchdown.

He caught a 19-yard touchdown pass from Smith. Fagan made the extra point.

Coming out of halftime, the Bearcats’ offense and defense stayed strong.

The Bearcats did not allow for another touchdown by the Bruins.

Phillips made a touchdown with 3:35 left in the third quarter. He had a 5-yard run, following a drive of 83-yards over 5 plays.

Tyre made the extra point.

With 44 seconds left on the clock, the Bearcats got another pick six; this time from Bouie.

He made a 90-yard interception return. Fagan then made the extra point.

Neither team scored in the fourth quarter.

Individual highlights included Phillips having 13 carries for 136 yards, Trevious Freeman having 12 carries for 37 yards and Bouie having two carries for 6 yards.

Head Coach Jeff Littleton said he was proud of the team’s effort.

“We felt like we could play well against this football team, and we did,” he said. “We still have some things we need to work on, but I’m proud of the coaches and the game plans they had and the players… they took this team seriously and we had a great week of practice.”

Littleton elaborated on the work he wants to see from the team, as he still doesn’t believe they have peaked yet.

“We need to work on our fundamentals,” he said. “There were a few things tonight; we did have some turnovers and we did have some penalties that we need to fix and correct, but we are going to go to work next week during Thanksgiving.”

Following another week of practice, the Bearcats will then host North Oconee on Friday, November 26 at home.

Littleton looks forward to hosting the third round of playoff games in a row and thinks it is great to be at home, especially for the fans and the players.