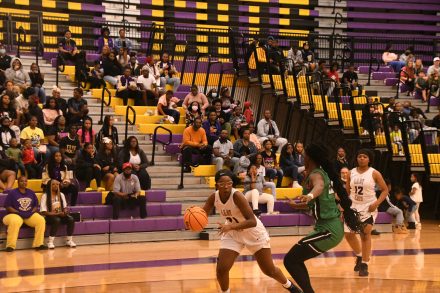 Zoe Evans dribbles the ball in the last quarter of the scrimmage against the Lady Indians, before going for a layup.

The Lady Cats Basketball team returned to the court this past Thursday for a scrimmage against the Seminole County Lady Indians. The Lady Cats dominated over the Lady Indians, ultimately winning 47-24.

The Lady Cats came out strong in the first quarter, scoring 23 points.

Coming out of halftime, the Lady Indians held the Lady Cats to 8 points in the third quarter.

Warner, Peterson, Amari Kimble and Raven all made a layup.

Warner had a layup and free-throw to finish out her night on the court. Kimble and Zoe Evans also made layups.

Warner was the big scorer of the night with 8 points total, while Sanders, Jakes and Peterson followed her up with six.

Head Coach Kelvin Cochran was proud of the team’s win after only a few short weeks of practice.

“We’ve been practicing about three weeks now, and I just thought we did really good,” he said. “It was great to see another team on the court, so we could see what we look like.”

Cochran was especially impressed with efforts of Jakes.

“She was one of our seniors who was unable to play last year because of COVID, but showed up tonight with a lot of energy,” he lauded.

“She got pulled out there (on the court) last year when Angel got a concussion, so she’s playing with a lot more comfort,” he said. “It was good to see her out there playing like she did.”

The scrimmage also allowed for a lot of freshmen and sophomores to get out on the court.

Cochran said he has seven seniors this year and only one junior, so he really needs everyone to be comfortable on the court.

The team will face their first real test on Saturday at home against Thomasville with the Lady Cats beginning at 6 p.m. followed by the Cats.

Bearcats prepare for faceoff against Bruins in 2nd round…