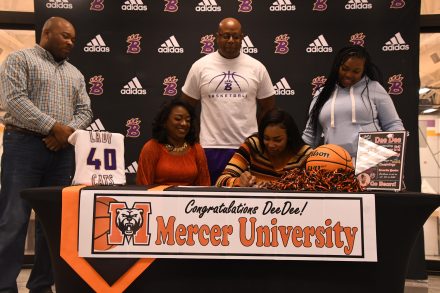 Detavia Salter signs her letter of intent, while her parents, Etosha and Xavier look on, along with sister Destine and coach Kelvin Cochran

Salter has been playing basketball since she was just a kid at the YMCA, before eventually turning her attention to the Lady Cats JV and Varsity Basketball Team.

It was then Salter became widely noticed by several D1 schools, including Georgia Southwestern, Troy University, University of North Carolina at Greensboro and Mercer, among others.

However, Mercer was the school that truly impressed Salter.

“No other team took the time to really look at the athlete’s mental state,” she said. “Not every athlete is in the right mental state all the time, but they really wanted to make sure you’re mentally okay.”

In order to do this, Mercer gives all their athletes a one-on-one counselor.

“If you’re struggling with schoolwork and it’s really getting the best of you, they allow you to take one hour a day to really focus on something else and talk to someone beyond just coaches and other athletes,” Salter explained.

Mercer also allowed Salter to meet coaches, other athletes and visit with the Kinesiology Department when she had her official visit, making her feel very at home.

Salter said she is most looking forward to getting an education in the Kinesiology program, and of course joining the winning basketball program, where she will be playing center forward.

She said she is thankful for her years at BHS and knows she will take what she learned on the court here with her to Mercer.

“I’ll take with me everything I learned, my work ethic, playing defense and offense and all my root work I developed here,” she said.

Salter encouraged other young athletes, who want an opportunity to play at the next level to never give up.

“If I could tell them anything it’s to never give up,” she said. “There are so many times when I wanted to give up, but now I’m committed to Mercer.”

Salter’s commitment to Mercer was an especially exciting moment for her sister, Destine Salter, who has watched Detavia pour all of her time and effort into basketball.

“I’m super proud of my sister,” she said. “She’s put in a lot of time and dedication to get where she is, and she is the most deserving of this. Mercer is getting an amazing student and athlete.”

Destine finished by saying she looks forward to many visits to Macon, where she hopes to see her sister on the court doing amazing things.