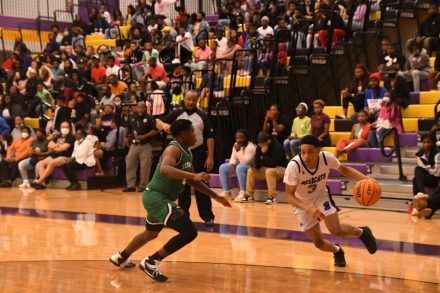 Ked Bryant takes off down the court past an Indian and heads to net for a layup.

The Bearcats Basketball team had a lot to prove during this past Thursday’s scrimmage, as they were going up against Coach Jeff Page’s son, who coaches the Seminole County Indians. Luckily, the Bearcats made Page proud, winning 62-33.

The Indians started off strong, outscoring the Bearcats by one point in the first quarter, 11-10.

The Bearcats saw the return of KJ Cochran on the court, after sitting out last season due to an injury.

Cochran scored five points, all through free throws, while VJ Ervin, Dialan Beard and Keith Gaines all had two points made through layups.

Page really saw the team come alive in the second quarter, though, when they scored 21 points.

“We had a great second quarter,” he said. “Their energy really showed.”

Cochran and Ashton Parris both had six points, with two layups and two free throws, while Ervin had four points with a pair of layups an, Denzel Chappell made a 3-pointer, and Ked Bryant had two points with a layup.

While their shooting game was strong, so was the defense, only giving up 8 points to the Indians.

The Bearcats headed into halftime, leading 31-19.

Coming out of the half, the Bearcats remained dominant, scoring 17 points in the third quarter, while the Indians had 11 points.

Beard had a strong third quarter, scoring 5 points with a 3-pointer and a layup. Parris, Amarion Ford and Zyrell Williams also made 3-pointers. Cochran also gained three points for the Bearcats through a layup and free throw shot.

Still in the lead 48-30, the Bearcats finished off the Indians for good in the fourth quarter, scoring 14 additional points.

Ervin scored five points, with a 3-pointer and a layup, while Parris and Bryant also made 3-pointers.

Mikavious Grant finished out the night with a layup and Ford with a free throw.

Cochran had the most points of the game with 13, followed shortly by Parris with 12.

Page was super pleased with the team’s efforts, especially after only three weeks of practice. He acknowledges they still have some work to do, mostly boxing out on defense, but is glad the team had the opportunity to play against someone other than themselves.

“It was good for them to get some pressure in a real game and have people in the stands,” Page said.

Page was also proud to see the balance on the team.

With the scrimmage now out of the way, the Bearcats turn their attention to the first game of the season against Thomasville on Saturday at home at 7:30 p.m.

There, Page hopes to continue seeing great things from both his senior leaders and JV players.