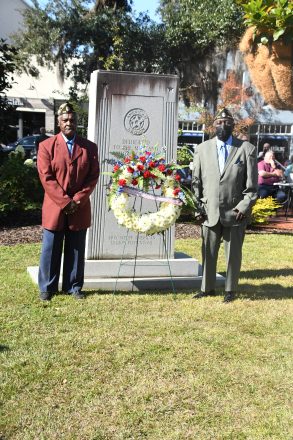 Members of the VFW place a wreath in front of the memorial in Willis Park on Veteran’s Day.

Thursday morning, Bainbridge residents and veterans from all branches of the military gathered in Willis Park to honor the sacrifices made of all those who served.

Mayor Pro-Tem Glennie Bench began the program by welcoming everyone in attendance and thanking veterans for their service.

“To our veterans who have joined us today, you are a hero in every sense of the word,” she said. “You live service above self and put our freedom and our national values first.”

Bench thanked the families of veterans, who she said should be remembered equally with gratitude.

Bench then turned it over to Pastor Ervin Flanders, who provided the Invocation, before the Bainbridge High School JROTC gave the Presentation of the Colors, while Leigh Powell sang the National Anthem.

Following a brief introduction by Councilwoman Roslyn Palmer, the Keynote Speaker, Jerry Eidson was then introduced.

Eidson was a 2000 graduate of BHS, where he took part in the JROTC program as a commander. He then attended West Point and graduated in 2004 as a second Lieutenant, before deploying to Iraq in the fall of 2005.

While in Iraq, Eidson was wounded and eventually sent home to Bainbridge.

Eidson spoke on his injury, explaining it was a difficult story to tell, but felt it was necessary and would serve the greater good.

“As a 24-year-old, leading a platoon, I drastically underestimated the nature of combat,” Eidson said. “I simply didn’t understand as a young kid what combat would be like.”

Eidson recounted he was deployed to an area in Iraq known as the Triangle of Death, but said he and his platoon came prepared, being from the 101st Airborne.

“We started losing guys daily, and I saw more carnage in death in the three months I was there than most people would see in a lifetime,” he said.

This carnage and death, along with the grim progression in Iraq led Eidson to lose all faith and hope in God.

“I figured there’s no way He can exist if He sends men off to combat to meet this kind of demise,” Eidson said. “So, I turned my back on Him.”

Overall, 11 men died in Eidson’s company, with many more wounded, including Eidson, after an IED sent him home.

On the night of December 9, 2005, Eidson was leading a convoy to pick up the rest of his platoon.

“We made this trip regularly and I knew the route like the back of my hand,” Eidson said. “We usually took a rear entrance most people missed. I had traveled the road so many times that I developed a sixth sense any time something was out of place.”

It was on this particular evening, Eidson noticed a large, uprooted bush that was not supposed to be in the road, and before he had time to react an IED exploded, launching his truck into a canal.

“When I regained consciousness, I couldn’t see or hear a thing,” he recalled. “it was all so eerily quiet after just being hit with a 500-pound roadside bomb.”

Eidson then began to check on his gunner and driver, who he could hear moans coming from.
As Edison called out to his driver, he heard nothing and knew he had to get to him. Eidson said he crawled out of the gunner’s hole, as his door was jammed shut.

“As I pulled my flashlight out to assess his condition, I saw that the driver’s door had been blown off. No amount of words could explain the carnage of his body my flashlight shined on.”

Eidson said he looked for any sign of life and finally saw his driver’s vest move, signaling he was still breathing.

Following his checkup on his driver, Eidson thought his men would be there to check on him, however he said he was still met with the same eerie silence, and realized no one was coming.

“To say that I was scared was an understatement, I was terrified,” Eidson said. “I knew for certain I was about to die, and the more and more I thought about it I didn’t want to die, so I got down on my knees and prayed.”

Eidson said not even a minute later, trucks arrived to save he and his men.

“Looking back it is clear that I quit on God, but He never gave up on me,” Eidson said. “He always remained faithful.”

Eidson’s driver went on to be airlifted, along with Eidson. It was the last time he saw Iraq and the end of his military career.

“When I came home, I was angry and confused about why I survived when others didn’t,” Eidson said. “I remained angry and that’s how I started living my life.”

Eidson detailed how he trusted God, because He saved him in Iraq, but Eidson couldn’t understand how the long-term plan would fill out, so Eidson turned to the Gospel.

“I found purpose in my pain through Jesus,” Eidson ended. “My service looks different these days, but I now serve a Kingdom that has no end.”

Jessica Matthews then concluded with a Salute to Departed Veterans, followed by the playing of TAPS.