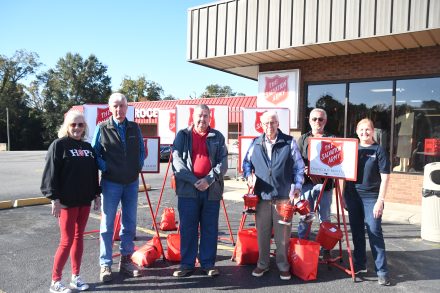 The Salvation Army kicked off their bell ringing on Saturday morning.

Saturday morning the Salvation Army kicked off their annual Red Kettle Bell Campaign fundraiser with a blessing of the kettles and holiday music provided by the Bainbridge High School Band.

Rev. Harold Burrell opened the morning kickoff with some fond memories of growing up and ringing the bell.

“It’s always been the sign that Christmas is just around the corner,” he said. “After WWII, I remember the storefronts having those kettles and the people there ringing those big, old bells, and as a little boy, I knew Christmas was here.”

Burrell went on to say the most wonderful time of the year would always start with the Salvation Army.

He detailed a trip he went on to London, where every store advertised that, on Christmas Day, the red kettle bells would be there.

He said he believes the money collected in the kettles ensures that adults and children alike experience the magic of Christmas through the actions of Salvation Army.

Burrell compared the Salvation Army’s work to that of Christ and Santa Clause’s work.

“Some people want to do away with Santa Claus, but he is the best depiction we have alive of Jesus Christ today, simply because he gives to those who don’t deserve it,” Burrell said. “Isn’t that what Jesus did for us? That’s what the Salvation Army does every day.”

Burrell then encouraged everyone in the crowd to take part in the work Salvation Army does by donating to the Red Kettle Campaign.

“At Christmas time, we get the wonderful opportunity to be a part of what they do,” he said. “The truth is the Salvation Army came out of Christian love for other people, needy people.”

Burrell thanked the Salvation Army for their partnership with the various churches, and said through their campaign, people of all religions can come together for the common cause.

“Christmas time is the greatest coming together we see in the world, and we still see it here, every time we pass one of these (red kettles),” Burrell said.

Burrell then pointed to his grandson, Asher, and explained that even the youngest generation comes together for this cause.

“Since he could walk, this little redhead has been going with us to do the kettles, and it’s been a high point of his life, and I hope it stays that way,” he said.

Burrell then prayed over the kettles, praying for a great turnout and the greatest giving the Salvation Army of Bainbridge has ever had.

Director Merreann McDonald thanked Burrell and hoped his prayer would bless all the bell ringers and bring them joy as they helped the community.

“I just pray that what goes in these kettles helps our community exponentially,” she told the crowd.

McDonald then encouraged everyone to have a great day and start the bell ringing at locations all across Bainbridge.