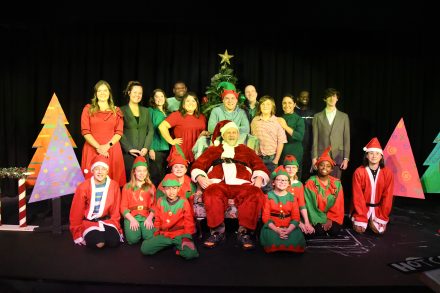 The cast of Elf the Musical smiles during rehearsal, ready for some Christmas magic on the stage.

“There’s room for everyone on the Nice List,” just ask Buddy the Elf.

This December, the Bainbridge Little Theatre will be performing Elf The Musical, which is based on the beloved holiday film.

For those who haven’t seen the film, Elf is a hilarious fish-out-of-water comedy that follows Buddy the Elf in his quest to find his true identity.

Buddy, a young orphan, mistakenly crawls into Santa’s bag of gifts one night and is transported to the North Pole. The would-be elf is raised, unaware that he is actually a human, until his enormous size and poor toy-making abilities cause him to face the truth.

The show is being directed by Rachael Herendeen and Joshua Apke, and is under the musical direction of Michael Inlow. Choreography is by Susan Higdon, while the Stage Manager is Justin McStay-Harrison, and production by Krystal Apke.

The show has been a labor of love for the cast and the crew.

“This is very exciting to see the love of theatre reaching new people,” said Herendeen.

BHS senior, John Ingram has been cast as the star role of Buddy, while Apke will take on the role of Buddy’s love interest, Jovie.

Kylie Etress will play the role of Deb and Markcus Cooper has been named as a Manager.

Tickets sales have already begun for this wonderful family holiday show. Tickets are $18 for adults and $15 for students. They can be purchased online at www.bainbridgelittletheatre.com or at the door. The show dates are December 2-4 at 7:30 p.m. with the doors opening at 7:00 p.m. Sunday, December 5, is the last showing at 2:30 p.m., the doors will open at 2 p.m.. Get your tickets and come embark on a journey of cheer and family.