Bearcats claw Sharks in first round of State Playoffs, 42-0 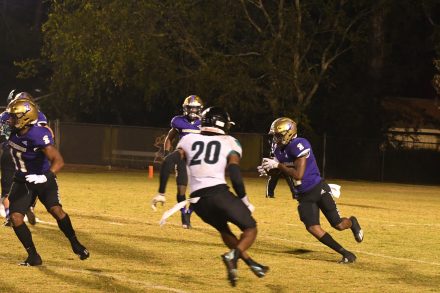 Javon Cox carries the football, trying to avoid an Islands Shark player during Friday night’s 1st round of the playoffs. Cox had nine carries for 20 yards.

The Bearcats started their playoff run on Friday night against Islands High School, where they dominated in all three phases of the game, winning in a complete blowout, 42-0.

Antavious Murphy opened up scoring in the first quarter with 8:55 left.

He caught a 26-yard touchdown pass from Quarterback Bo Smith, following a drive of 40-yards over 3 plays.

Blake Fagan then made the extra point.

Minutes later with 5:22 left in the quarter, Keenan Phillips made a 16-yard run for a touchdown.

Nicholas Tyre then made the extra point, giving the Bearcats a 14-0 lead.

The final play of the quarter came with only 1:18 left, Deyon Bouie caught a 79-yard touchdown pass from Smith.

It would be the first of three touchdowns made by Bouie throughout the night.

Headed into the second quarter, Bouie caught an 11-yard touchdown pass from Smith, following a drive of 67-yards over 6 plays with 8:11 left in the half.

Tyre made the extra point.

Phillips then made another touchdown with 4:34 left to go. He made an 8-yard run, following a drive of 32-yards over 3 plays.

Bouie ended the second quarter with one last touchdown, the final one of the game, when he caught a 34-yard touchdown pass from Smith with only :02 left in the half.

Tyre then made the extra point, leaving the Sharks floundering with 42-0 score.

Head Coach Jeff Littleton was proud of the win, but said the team also won in practice.

“I’m real proud of how we won each day in practice,” he said. “We had a real good week at practice and it showed on the field tonight with execution in all three phases.”

With the great practices and complete domination on the field, Littleton was able to play multiple different players, including sophomore Quarterback Cam Sanders and sophomore Running Back Javon Cox.

Individual highlights for the night included Phillips having 14 carries for 113 yards, while Cox had nine carries for 20 yards.

“We’ve practiced putting in other players during the week in case something was to happen, and I’m proud of our players and our coaches for putting a good game in,” he said.

Littleton said he really saw the team come together during Friday night’s game, which is important at this point in the season, as they will soon face even tougher opponents on the road to the state.

“They’re a fairly new school and this is two years in a row they’ve made playoffs,” he said.

The Bearcats will now host the winner of the Fayette County vs. Northwest Whitfield game at Centennial Field next Friday in the second round of state playoffs.