AG Man & Woman, Influencer of the Year named at luncheon 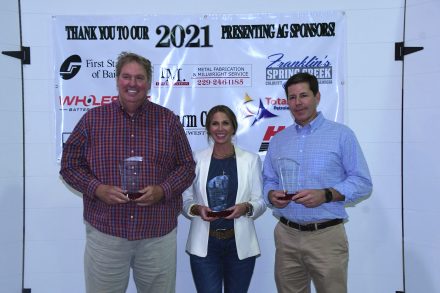 The Ag Appreciation Luncheon honored Donald Barber as Ag Man of the Year, Laura Manley as Ag Woman of the Year, and Southwest Georgia Farm Credit with the 2021 Ag Influence Award.

After last year’s drive-up to-go lunch, the Bainbridge-Decatur Chamber of Commerce held this year’s Ag Appreciation Luncheon indoors at the Cloud Livestock Facility. Tables filled up quickly as crowds of farmers gathered to hear the keynote speaker, Representative Sam Watson, and to find out who this year’s Ag Man & Woman of the Year would be.

Rob Cohen, chairman of the 2021 Ag Committee, welcomed attendees and led in the Pledge of Allegiance, with his daughter Kathryn Cohen performing the invocation.

After the invocation, Representative Watson was introduced. Prior to being elected to office in 2012, Watson attended ABAC and UGA, and in addition to being a representative, he is a graduate of the Georgia Leadership Group, a member of the Colquitt County Cattleman’s Association, and a member of the Colquitt County Farm Bureau’s Board of Directors, just to name a few of his positions and achievements.

“He has numerous awards, too many to speak of, to his name,” Cohen said.

Upon taking the stand, Watson informed the attendees of the various issues and events involving Georgia agriculture, first being reapportionment.

“We voted on our maps on Wednesday,” he said, “so your area is actually only going to have one representative at the state capital now. I think you’ve had two, and Joe Campbell will be taking over the entire portion of Decatur County.”

Watson supported Campbell, saying, “He’s fairly new… He does a great job as well, and you’ll be in good hands under Joe’s leadership.”

With only one representative, this led to the discussion of loss of population in rural Georgia, and resulting loss of representation.

“We’re definitely going to lose two members basically south of Macon, and we may lose three,” Watson said. “That’s due to a population shift into more populated areas of our state, that being Atlanta.”

The conversation then moved to new items of legislation that will be up for a vote soon, with one that would potentially allow two family farms unrelated to each other to come together to purchase and/or build things.

In 2017, two family farms were allowed to buy land and still receive the same tax benefits; however, purchasing other things, like livestock and equipment was not included, which has led to the new proposed legislation including it to be drafted.

Other issues discussed by Watson included rural issues, specifically things like trucking and broadband, as well as the state’s current financial position.

After concluding his speech, the Ag Man & Woman of the Year were announced. Last year’s Ag Man of the Year, Van Smith, introduced this year’s Ag Woman of the Year, his daughter, Laura Manley. Manley grew up farming and involved in FFA, going on to graduate from ABAC, before returning to Bainbridge and starting a career at FRM Feeds.

After the Ag Woman of the Year, Glenn Heard introduced the Ag Man of the year, Donald Barber. According to Heard, in addition to farming, Barber has also served on the hospital authority, the First National Bank board and with Sowega Cotton Gin.

In addition to the Ag Man and Woman of the Year, the 2021 Ag Influence Award was given, with Paxton Poitevint accepting the award for Southwest Georgia Farm Credit.

“I can assure you it takes a strong team of 57 people, and I’m just fortunate to be up here to represent those 57 people,” Poitevint said.

Door prizes were awarded after the awards, bringing the event to a close.