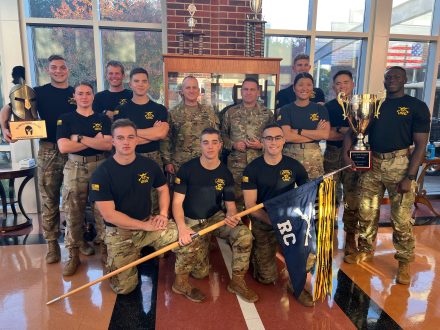 On a rainy weekend in late October at Fort Knox, Kentucky, the University of North Georgia’s (UNG) Ranger Challenge team secured its fourth consecutive Spartan Ranger Challenge victory. It advances to the Sandhurst Military Skills Competition, set for April 2022 at the U.S. Military Academy at West Point, a competition where it has won the past three ROTC titles and finished in the top four overall each time.

Haydn Griffin of Bainbridge, GA, was part of the team that won Spartan Ranger Challenge.

“These cadets continue to make us proud with their relentless work ethic and determination,” Col. Bryan Kirk, UNG professor of military science, said. “We look forward to seeing them compete at Sandhurst.”

“The team’s continued success in the Spartan Ranger Challenge speaks volumes of the program and the quality of cadets we have here,” Sgt. Maj. Joshua Thomas, senior military science instructor and active-duty Ranger Challenge adviser at UNG, said. “They had a lot of pressure on their shoulders. They trained really hard, and the competition showed how much dedication and hard work they put in.”

Retired Maj. Donovan Duke, the team’s coach, expects his group to be a strong contender at Sandhurst again.

“They’re on track. We have to make sure we help them design a training program that maximizes their performance,” Duke said. “We need the right mix of training, stress, and experience.”

Farmer, who is the squad leader for UNG’s “A” team, also expressed gratitude for Kirk’s support in allowing the cadets to carve out the practice time they need.

“They go above and beyond to help us have what we need to prepare for success,” Farmer said.

Austin Gabriel, a senior from Athens, Georgia, pursuing a degree in criminal justice, is the noncommissioned officer in charge of Ranger Challenge.

Gabriel said his team’s ability to overcome adversity stood out.

“The most impressive part of the competition was when we completely dropped the ball on the grenade event, but we composed ourselves and kept our heads high to destroy the competition during the next event on the confidence course,” Gabriel said.

Thomas said the kinesiology department in UNG’s College of Education will be an integral part of the Ranger Challenge preparation for the cadets for the upcoming Sandhurst 2022 competition.

“They are helping us look more at the science side of the physical training,” Thomas said. “With their assistance, we hope to produce higher quality athletes than the other schools.”