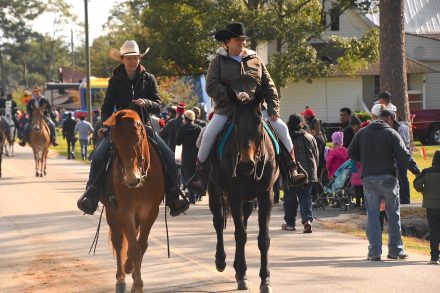 Members of the Calvary Lion’s Club worried that bad weather would put a damper on their Mule Day festivities. Fortunately, turn out picked up around noon, and Lion’s Club president Edie Harrison described it as a success.

Crowds clogged the streets in the town of Calvary, while cars were directed into fields and tree orchards to park, as countless people gathered for Mule Day.

Originally founded back in 1973, almost 50 years ago, the area’s farmers wanted to have a community event, as well as a way to provide funds for sight services. Thus, Mule Day was designated for the first Saturday in November, with the Calvary Lion’s Club choosing the mule to represent the day because of its importance to agriculture.

According to the current Lion’s Club president Edie Harrison, Mule Day had its heyday (no pun intended), in the 80s and 90s. Despite being founded nearly 50 years ago, Mule Day has only been held for 48 years, with Hurricane Michael canceling the 2018 festivities, and the pandemic ruining last year. Harrison was worried bad weather may put a damper on this year’s turn out as well.

“We usually have our biggest crowd in the morning, but it didn’t pick up until lunch time,” she said. “We had a good turn out, and we hope next year will be bigger and better.”

The festivities technically began Friday night, with a chicken pilau dinner and local talent show, with the dinners selling out according to Harrison. The real festivities properly began the following morning, with around 250 craft and trinket vendors and 50 food vendors opening at 8:00 AM, followed by the Mule Museum opening at 9:00 AM, and the parade beginning at 11:00 AM. The mule show was scheduled for 1:00 PM that afternoon, with cane syrup grinding, dancing, a petting zoo and various other activities offered throughout the day.

“I would absolutely say it was a success, especially in light of the weather,” Harrison said. “We were pretty worried.” She went on to thank those that helped and came out, saying, “We appreciate our community support, because without them we could not do it.”