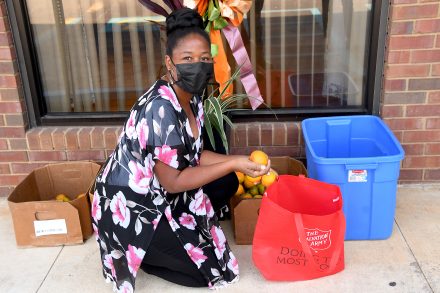 The Salvation Army is preparing Thanksgiving dinner boxes for those in need, including all the necessary fixings for a traditional Thanksgiving meal, like turkey, dressing, cranberry sauce and pumpkin pie, as well as fruits like oranges. “I absolutely love what we’re doing here right now,” director Merreann McDonald said.

The leaves change, the temperature continues to drop, and Thanksgiving draws near. With talk of thanks and gratefulness in the air, the Salvation Army will be providing Thanksgiving Food boxes on November 23. Applications for box eligibility are currently being accepted, and will be accepted until next week.

“It’s an application for us to determine eligibility,” Salvation Army director Merreann McDonald told the Post-Searchlight. “We are accepting applications through November 13, and then if anybody comes along after that time, we’ll do a waiting list. But, I don’t think anybody would be turned away.” Applications received after Friday, November 12 will be considered based on eligibility of resources.

Applicants will be notified if they are eligible the week of November 15, with pick-up on Tuesday, November 23, from 11 AM to 2 PM.

The Bainbridge Salvation Army has put together these boxes for several years, with McDonald having been involved with the program since 2018.

“With the overwhelming response we’ve had from our S.o.S. (Supper on Scott St.) Program, the hunger need is very prevalent in our community, and it’s genuine hunger,” she said. “I absolutely love what we’re doing here right now… The food ministry gives you the bread to develop the conversation to meet the need in somebody’s life.”

In addition to the Thanksgiving food boxes, the Salvation Army will have another Supper on Scott Street the Monday after Thanksgiving, In regards to the Thanksgiving boxes, McDonald said, “We can always take donations that are designated for the food ministry, and that is probably the best way people can help, or they can volunteer to pack boxes, because we will need volunteers to pack these boxes.”

The Salvation Army is also looking to partner with Joe Livingston of the First United Methodist Church of Bainbridge, which will also be serving meals on Thanksgiving, with the Army taking names of those in need. The Salvation Army will also put on a Christmas food box drive, which would be aimed at helping families during the children’s break from school.

For more information on donations, volunteering, eligibility or any other questions, the Bainbridge Salvation Army can be reached at (229) 243-7250.