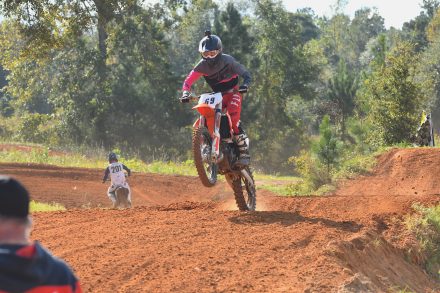 Crowds gathered at Southern Training Facility and Raceway on Sunday morning for the track’s first race, the Inaugural Halloween Race. Owner Cole Bulger has dreamed of owning the track, originally owned by Shane and Willa Lusk, and purchased it this past July. He’s spent the last several months cleaning up the track, which had fallen into overgrowth and neglect over the years.

“We were offering more classes than what people signed up for,” he said.

Bulger has been involved in motocross since childhood, and was pleased with the first race.

“I have no complaints. It was a soft opening, it was good. We had it scheduled with two other big races that were going on,” he said.

In addition, Southwest Baptist Church’s Sunday morning service was streamed on screen for attendees, and a food truck was also provided by the church.

Bulger has multiple plans for the track’s future, and is currently in the process of clearing land for a full campground, with 20 total campsites offered. He also plans on offering training camps this month.

“We have Austin Cozadd, who is going to be doing a camp this Saturday, and then we’ll have Jay Weller, who is going to do a camp next Thursday, November 11,” Bulger elaborated. “Then also, all of January and February, I’ll have Hall of Famer Scott Plessinger here doing a camp with about 20 kids. They’ll be living here for about two months. Then in February, through the first week of March, I’ll have Joey Crown and Matt Crown coming to do another camp, with 10 to 15 kids staying here for a full month.”