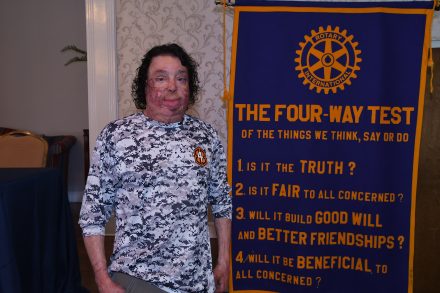 Klay Armstrong smiles after speaking with Rotary about how he founded Beards for Benefits and how it changed his outlook on life.

The Bainbridge Rotary Club gathered for their weekly meeting at the Bainbridge Country Club this Tuesday. The guest speaker for the day was Klay “Pudoo” Armstrong, founder of Beards for Benefits (B4B).

After being injured in an industrial accident in 2006, Armstrong found himself helping with hunts for handicapped children and veterans.

“I got to noticing that the kids were always happy, no matter what condition or position they were in, but a lot of these veterans I went on hunts with were bitter, just like I was,” Armstrong said. “They couldn’t understand why this happened to them, ‘Why’d I get picked, why, why, why?’”

But one hunt would turn out to be a wake-up call to Armstrong.

“There was this kid in a wheelchair, we were sitting there talking. He was 12 or 13 years old… and he looks up at me and says, ‘Mr. Pudoo, you know what your problem is? You’re too busy trying to live like you were, you need to live who you are now. This is the only life that I know, what’s wrong with it?’”

This changed Armstrong’s outlook on life, and led to the creation of B4B.

“I talked to a couple of friends of mine about what I was thinking about doing, would they mind helping out… And first off everybody said ‘Well it’s going to be hard to have that many people in the woods trying to kill a turkey,’” Armstrong explained. “I said, ‘Well it’s not about killing a turkey, let’s get that kid and that vet to sit together, and just see how it works.’”

The first year, only two kids and two vets participated; this year’s B4B saw 20 disabled kids and 20 veterans pair up for hunts.

As a non-profit, B4B is aimed at not only providing an emotional experience for the participants, but giving back to them.

“We have rebuilt veteran’s trucks that were tore up and they didn’t have any way to get around,” Armstrong said. “We’ve bought guns for kids because they didn’t have one that they could shoot, now we’ve found someone that builds guns for the kids. We find out whatever they need, we give it.”