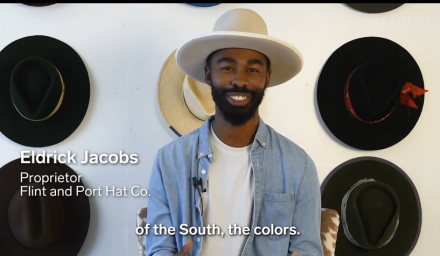 A screen shot from Style Insider’s video done on Eldrick Jacobs shows him inside his shop with the multitude of hats he has created.

Not many individuals can say they’ve been featured on Style Insider, much less become an overnight sensation, topping 3.5 million views, but Bainbridge native and owner of Flint and Port Hat Co. Eldrick Jacobs did just that.

Jacobs said the popular media company contacted him after he posted a reel on social media app Instagram, showing a snippet of his hat-making process.

“They reached out to me after that reel went viral,” Jacobs explained. “Apparently the editor-in-chief shot an email over to one of the producers with my information and from there the producer contacted me and sent in a team in from LA.”

Upon arriving from LA, the production team followed Jacobs around for a few hours, taking in the sights and scenes Bainbridge had to offer.

“They really enjoyed the narrative of what we are trying to do here, bring back Main Street with craftsmen and artisans,” Jacobs said. “We told that story and did an interview.”

Jacobs’ full interview was then released on Style Insider’s Snapchat channel, followed by their YouTube channel and Facebook page.

“Facebook has the single most unique viewer hits,” Jacobs said. “It was shared in various groups and on other pages.”

This is the largest media company to ever feature Jacobs’’ work and he couldn’t be more excited.

“It’s really nice to have that appreciated, the work you pour your heart and soul into and have it seen as something of value,” he said. “For me, this whole thing is telling the story of history, because I use the traditional tools and techniques of hat making.”

Throughout the Style Insider video, Jacobs makes a hat from start to finish, using his hands and traditional techniques, while voicing over exactly what he is doing.

“I really appreciated his comment,” Jacobs said. “Because, you hear me say in the video how when the sweatband goes into the hat, this thing that was just totally just undefined and raw really transcends into a nearly finished product.”

Jacobs was wowed by other comments commending his work.

“It’s just really nice to have people appreciate this craftsmanship,” he said.

Jacobs is thankful that the video really captured the essence of who he is as a creator and artist.

“The video did a really good job of capturing the complexity of hat-making and the skills and the art,” he said. “They showed that hats are wearable art.”

Since the release of the video, Jacobs has seen leaps in his business sales.

The wait time for a hat to be made by Jacobs is currently four months, but he is planning to roll out a new system prior to Christmas that allows a certain amount of customers by quarter.

Jacobs will also be launching a ready-to-wear line this month, so it can be more accessible for people who want to give a hat as a gift.

The hats will be available in the storefront and have a back stock at their brick and mortar location, 219 E. Water St.