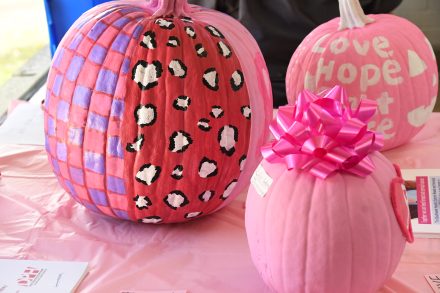 These three pumpkins were part of the Health Department’s contest with the leopard print pumpkin winning.

Those who have paid a visit to the Health Department recently will probably have noticed a trio of pink pumpkins in the lobby. These are a part of a pumpkin decorating contest held by the department for Breast Cancer Awareness Month.

According to director Austin Stuckey, this is the first year the Health Department has held a contest like this.

“This was all Jill McNurlan, our patient navigator, who came up with a way to try to get some community involvement, a little contest to bring awareness to breast cancer,” Stuckey said.

Amanda Rodrigues was declared the winner of the contest.

In addition to the contest, McNurlan also handed out goody bags to visitors that Tuesday as part of the awareness campaign. Other county Health Departments in the district area held similar contests, with some having Jack-o-lantern contests. While this year’s participation was slim, with the three pumpkins being the only submissions, Stuckey said the Health Department does plan on making this an annual contest.

“The whole purpose of the event was to spread awareness for breast cancer prevention, and things of that nature,” she said. “You know, reminding women to get their annual mammograms, and also to spread awareness about our program that we offer here, which is our breast and cervical cancer program. We offer annual exams, mammograms and things of that nature for women.”

For more information on mammograms and other services offered by the Decatur County Health Department, they can be reached at 229-248-3055.