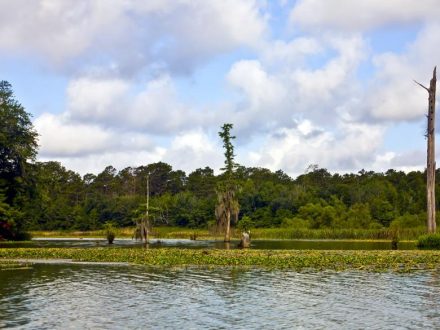 One of the topics on the agenda for this past week’s Decatur County Board of Commissioners meeting was the current condition of Lake Seminole. John Petrie, of Seminole County, spoke to the commissioners on the state of neglect the lake currently finds itself in. He hoped to gain a letter of support from the commissioners to send to Sanford Bishop, in the hopes of getting funding for the Army Corps of Engineers.

This effort to clean up the lake began last month, when Petrie gave Paul Fryer, Sanford Bishop’s field representative, a boat tour of Lake Seminole to show him its current state.

“It took about four hours to be on each arm of the lake, and to see the condition, and the neglect, that has gone on for the last two years,” Petrie said in an interview. Since then, he has also met with members of the Army Corps of Engineers about funding the upkeep.

“It was a very informative meeting,” he said. “We found out that the Corps has $200,000 this year to maintain the lake. Unfortunately, we’ve been told it costs $800,000, and that is definitely an oversight by our political leaders. We need more than that, and that’s what we’re more or less working toward.”

As for the current state of Lake Seminole, according to Petrie, 23 different types of weeds have begun overtaking the lake.

“It’s difficult to control, but it can be done, and has been done in the past,” he said. “The last two years, the Corps has received no budget whatsoever to do anything in Lake Seminole. Because of that, it has allowed that lake to overrun itself.”

In addition to weed overgrowth, other basic maintenance projects, such as the maintenance of fish gates, designed to keep carp in a sequestered area, have fallen behind. Maintenance of back channels and marker buoys has also been neglected. “They’ve never maintained anything since Hurricane Michael,” Petrie said.

As far as options for funding maintenance of the lake, there are only two feasible ones, according to Petrie.

“All we can do is encourage the federal funding for the Corps… We cannot give the Corps money to have a job done. What we can do is generate that money, and hire the contractor the Corps uses, and spray the lake ourselves. That’s the only alternative we have at this time.”

County Commissioner Steve Brock attended another meeting Petrie held Wednesday evening, and confirmed that the Commissioners will write a letter in support of his efforts.

“I’ve lived here 15 years,” Petrie said. “In the 15 years I’ve been here, I’ve seen a resistance to outside suggestions, and when I say that, I mean by other counties or other people. We need to work together on this, that’s my biggest point, and I’m trying to get us to that point.”